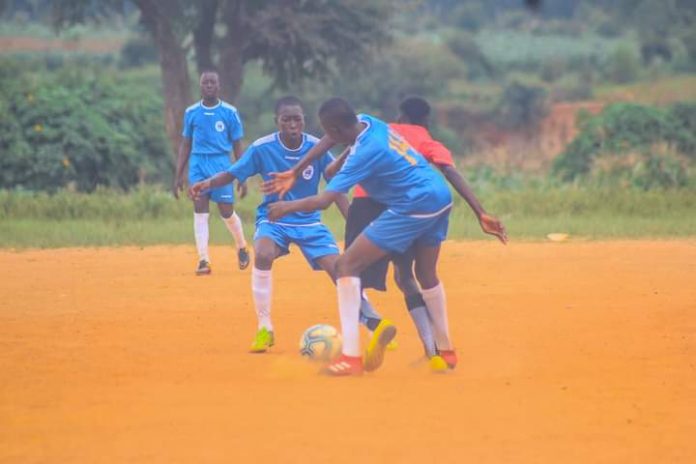 The first stanza of the Tsenba Wummen Under 14 & 16 Football League ended last weekend in Jos, Plateau State with reigning champions, Mees Palace Football Academy emerging as halfway champions in both categories even with a game in hand.

Mees Palace FA has shown from the start of the season that any team that will stand in their way and the defence of both crowns will have a lot of work to do. It was no surprise the team led almost on all fronts in both categories ranging from the best attack (170 goals in both categories) and best defence (only miserly 16 goals conceded across 36 grueling matches) and they garnered almost the entire maximum points from mammoth 36 games (they have scooped unbelievable 104 points from possible 108) in both cadres.

They remain unbeaten through the first stanza and are truly the undisputed halfway winners with their main rivals (Relentless FA, Highland Stars, St. Monica’s Academy, and FC Izam) all playing second fiddle and needing to put up greater effort to deny them another roller-coaster season.

Despite postponements to five matches in both categories last weekend, Tsenba Wummen League still lived up to its billings as the most followed and popular league on the Plateau and in the North Central region with more goals recorded and games won and lost under the most competitive environment.

In the Under 14 cadre, Mees Palace FA’s game with Multiple Waves was shifted due to technical hitches but Relentless FA failed to capitalize on that to assume the summit of the table at least for the meantime. Having gone unbeaten almost throughout the first stanza matches, Relentless FA suffered shock loss when it mattered most to Highland Stars.

In the Under 16 cadre, St. Monica’s FA secured an important win to cement the second spot while FC Izam followed up their first loss of the season to Mees Palace with another surprise defeat to rejuvenated Flying Shooters.

Relentless FA finished the first stanza in comfortable second spot with 48 points from 19 games but they will still be ruing their last weekend’s collapse to Highland Stars which hindered them from leapfrogging Mees Palace FA (who are in the first position with 50 points) whose game with Multiple Waves was shifted to a later date.

Relentless FA drew the first blood in the game in the 26th minute through Daniel Saidu but Highland Stars responded with two quick goals through Lepnan Pudens and Davou Rwang in the 40th and 43rd minutes. Regular goalscorer, Ebuka Jeremiah Sunday thought he had bagged the equalizing goal with two minutes to the end of the game when he rifled home the leveler but Highland Stars’ Donendung Goyol ensured their illustrious foes suffered their first defeat of the season with the winning goal in the dying minute of the game.

Ceemonie SA, Super Stars, Young Stars, Gangere Youths, and Elspuron continued their recent fine form with easy victories while 11th placed Jazzy Stars were beaten 2-0 by Young Reformers who bagged their fourth win of the season and are in 17th spot with 16 points.

FC Izam made it second successive loss after a surprise 2-0 loss to Flying Shooters. They had an unbeaten start to the season but Mees Palace FA ended that fine record in the penultimate game to the end of the first stanza. They succumbed to two early goals from Flying Shooters’ Muhammed Adams and Joel Joseph in the 5th and 7th minutes to make it a second straight loss. FC Izam finished the first stanza in the third spot with 43 points from 19 games but are five points adrift of second-placed St. Monica who have 48 points. Flying Shooters shot their way to the 10th spot with 26 points but with three games in hand.

Jeddy Academy pipped hapless Top Free Academy, who recorded their 16th defeat of the season, 3-2 to finish the first stanza in 14th position with 20 points while CF Bwin and Mabo Young Stars defeated Royal Stars and FC Sports respectively to end the first round in the 13th and 19 spots with 21 and 10 points in that order.

St. Monica’s FA without their talisman and league’s leading scorer, Isaac Jawo who has scored 23 goals from 16 games pipped Samba Boys 1-0 to cut the gap on leaders, Mees Palace FA to six points. They have 48 points and are in the second spot with five points buffer ahead of FC Izam.

Three games have been rescheduled in this cadre including that of the reigning champions, Mees Palace FA and Galatians FA.

Lyon 2-1 Bordeaux: Kalu’s third goal of the season undone by...