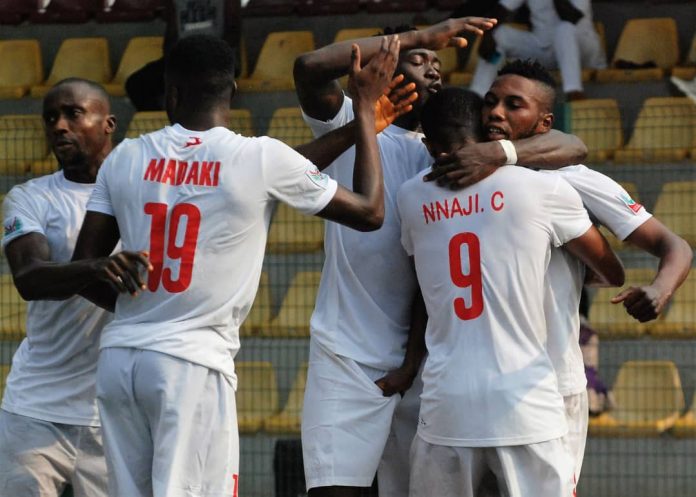 Rangers International F.C of Enugu were at the weekend pegged back by the bravery of the ‘Olukoya Boys’, M.F.M F.C in a match day 5, NPFL 2020-21 fixture that ended in a draw inside the ‘Soccer Temple’, Agege township Stadium, Lagos.

Coach Salisu Yusuf made three changes to his matchday 4 start squad handing Dauda Madaki, Uche John and Tope Olusesi places in the match day 5 starters and it was a vantage performance that would have seen more goals but for some splendid goalkeeping from Folarin Abayomi for the host.

The sublime football trickery of the visitors’ creative midfielder, Ugochukwu Ugwuoke was a handful for the coach Tony Bulus tutored side as he teased and tossed the backline around and would have had his name on the score sheet earlier than the 24th minute when he side footed in past a bemused goalkeeper, Abayomi after Dauda Madaki had set him up with a headed effort.

However, the host reacted well to the setback just five minutes later as some slack defending allowed Balogun Muyiwa to poke home past a stranded Nana Bonsu to the relief of the host’ bench.

Ugochukwu had another crack at goal on 37 minutes after some neat interchange of passes opened up the host’ backline but his well struck shot was pushed over the bar by Abayomi.

As the game crept past the hour mark, coach Salisu made three substitutions that saw Shedrack Asiegbu, Femi Ajayi and Israel Abia taking the places of tiring Christian Nnaji, Dauda Madaki and Agu Kenechukwu, and the impact was felt even without any goal from the troika.

Mbwas Mangut, chief coach of Rangers, who spoke to the media after the encounter, praised the efforts of his players in the encounter stressing, “It was a good game and we should have earned all three points at stake but for some good goalkeeping from the opponents. We keep building and progressing with more matches and it is our belief that we will deliver the goods at the end of the season.”

Ugwuoke Ugochukwu said, “I am happy with the goal I scored but very disappointed that we failed to grab all the three points. We hope to do better in future matches.”