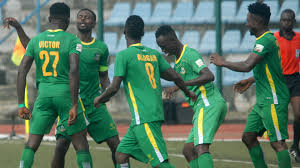 Kano Pillars will have to overturn a two goal deficit and also prevent ASC Jaraaf of Senegal from scoring if they are to progress to the first tound of the CAF Confederation Cup affer they were thrashed 3-1 by their host at the Stade Demba Diop Stadium, Dakar on Saturday evening.

Sai Masu Gida who were default representative of Nigeria in the Africa’s second tier club competition by virtue of being the Champion of the last held Aiteo Cup (2019) after Coronavirus pandemic stopped the 2020 edition from holding, started like house on fire and even scored first through David Ebuka in the 12th minute.

Just like the case of touching the lion’s tail and expecting its reprisal attack, Jaraaf went in hot search for the equaliser and got it five minutes later after Kano Pillars’ goal through Zaky Bassene and they made it 2-1 before halftime through Samba Diallo in the 38th minute.

Having recovered from the initial scare, Jaraaf used the second half to consolidate their lead and they got their wish in the 81st minute through Matar Ndiaye to ensure they will travel to volatile Nigeria with two goals cushion.

The return leg holds at the Ahmadu Bello Stadium, Kaduna on December 6 and Kano Pillars will be out to avoid another early elimination after almost similar ouster on the continent in all their previous representation save the 2009 when they got to the semi-final of the CAF Champions League before losing to Heartland FC in an all Nigerian last four clash.