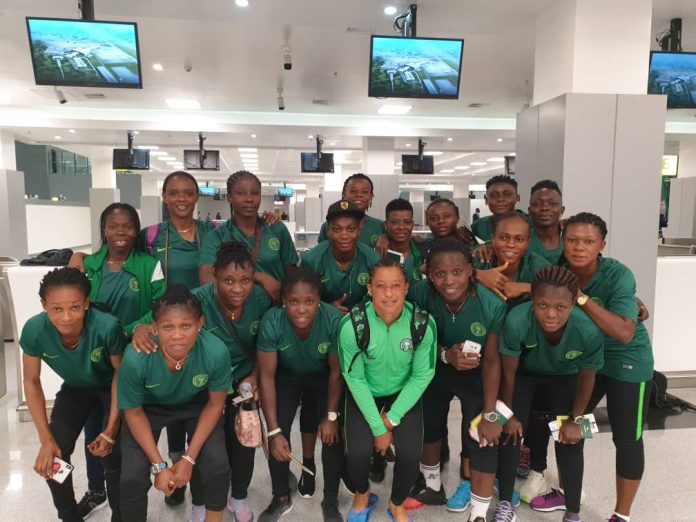 Nine-time African champions Nigeria begin their race to the Women’s Football Tournament of next year’s Olympics in Tokyo with a determination to earn an away win over Algeria on Wednesday in order to make the second leg in Lagos next week an easier session.

Coach Thomas Dennerby and squad arrived in Algiers on Monday after travelling through Turkey and had training sessions on Sunday evening and on Monday. Their final training session was scheduled for 6 pm Algeria time on Tuesday.

Dennerby is in the North African country without a number of his key actors, principally the Europe –based legion who are involved in club duties. First choice goalkeeper Chiamaka Nnadozie is also with the U20 squad at the 12th African Games in Morocco.

Yet, there is quiet confidence in the squad that victory is the target and the Super Falcons will borrow a leaf from the Falconets, who hammered their Algerian counterparts 3-0 in Algeria on Monday to qualify for the gold medal match of the ongoing African Games.

Veteran midfielder Osarenoma Igbonivia said on Tuesday: “We have not been to the Olympics for several years now, and we are not happy about that. We will put up our best effort on Wednesday in order to make the second leg a formality.”

The Super Falcons last played at the women’s football tournament of the Olympics in China 11 years ago. They were bumped by Cameroon in the African qualifying series for the London 2012 games and then lost to Equatorial Guinea in the race to Rio 2016 Olympics.

The Algeria Football Federation has scheduled the match for the Stade Mustapha Tchaker in Blida (outside Algiers), to kick off at 7 pm Algeria time (same time as in Nigeria).

Malian Teneba Bagayoko will be the referee, with her compatriots Mariam Coulibaly (assistant referee 1) and Djeneba Dembélé (assistant referee 2) also on duty. The fourth official will be Dorsaf Ganouati from Tunisia while Mana Dzodope from Togo will serve as referee assessor and Oumou Kane from Mauritania will be the match commissioner.

18 FALCONS IN ALGERIA FOR OLYMPICS QUALIFIER