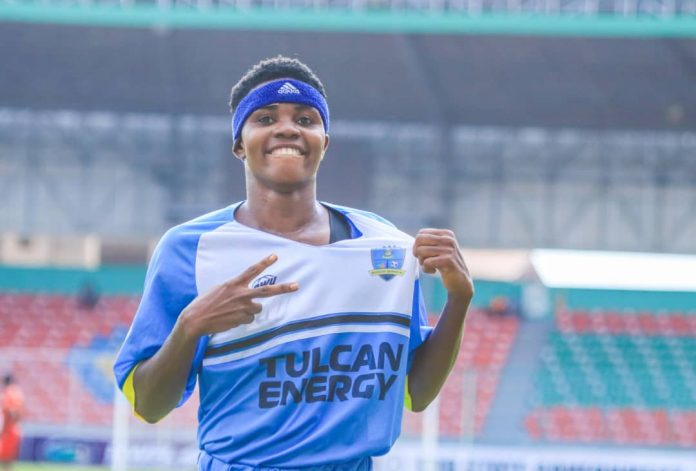 Bayelsa Queens needed a second half goal from star girl Monday Gift in the 47th minute before narrowly edging Delta Queens 1-0 in an enthralling NWFL Premiership Super 6 encounter played at the Samuel Ogbemudia Stadium in Benin City yesterday in one of the Matchday Four fixtures.

Delta Queens came out the better of the two sides in the first half knowing that it was a must win game for them to stand any chance after a loss and two draws in their opening three games.

But Bayelsa Queens struggled to cope with the Asaba based club’s strength in Midfield as the first half ended in a stalemate.

The Gloryland Ladies came out of the dressing room a changed team as they did against Edo Queens and were rewarded with a goal in the 47th minute of the game by the competition’s top scorer Monday Gift who got her seventh goal of the Super 6 from only four games.

The “Prosperity Girls” had more chances to finish the game but were unable to see off their South South neighbours when Rashidat Kafayat and Monday (again) missed from very good positions that would have extendded the lead.

Delta Queens pushed on to get an equalizer but were stopped by the brilliance of the Defensive duo of Uzoamaka Igwe and Alake Kasali to see the game out.

Bayelsa Queens with four wins out of four are atop the table with 12 points and they will be hoping to win the title when they trade tackles with Nasarawa Amazons on Sunday, While Delta Queens will play Naija Ratels on the final day of the competition, for pride.

After a draw and two losses from their opening three games, hosts, Edo Queens finally managed to eke out their first win after a battling 1-0 victory over hapless Naija Ratels at the Samuel Ogbemudia Stadium, Benin.

Esther Oyenezide who is on loan from FC Robo Queens scored her second goal of the playoffs and Edo Queens’ second goal as well in the 18th minute to guide them to their first win.

It was the first win of Edo Queens interim manager, Grace Kurah as they leapt to four points from four games ahead of their last game with Rivers Angels on Sunday, also at the Samuel Ogbemudia Stadium, Benin. Naija Ratels who are last in the championship without a point after three games will face Nasarawa Amazons today in a rearranged fixture.

Meanwhile, reigning NWFL Premiership champions, Rivers Angels have got their second win of the ongoing Super 6 Championship after they came back from a goal down to beat Nasarawa Amazons at the UNIBEN Sports Complex, Benin city yesterday.

The Pride of Rivers started the championship with a 2-1 loss to Bayelsa Queens after their ex- player, Gift Monday’s stoppage winner on Monday, broke their hearts.

They could only muster a draw against Delta Queens before they finally ended their bad spell with a 2-0 win over Naija Ratels on Wednesday courtesy Chiamaka Okwuchukwu’s double.

In their yesterday’s win over hitherto indomitable Nasarawa Amazons, Rivers Angels were on the back foot in the 39th minute after a mistake from goalkeeper, Charlotte Adjei gifted Mercy Idoko the opening goal but Maryann Ezenagu levelled the scores in the 72 minute for Rivers Angels when her amazing free-kick went past Rita Akarekor.

By virtue of the win, Rivers Angels displaced Nasarawa Amazons to occupy the second spot with seven points from four games but they have played a game better than the Solid Babes from Lafia.

Bayelsa Queens are on the brink of another league title because of the loss suffered by their nearest challengers, Nasarawa Amazons. Rivers Angels have missed out of the title race. They can only finish the playoffs with 10 points even if they beat Edo Queens on Sunday.

Nasarawa Amazons will have a chance if they win their outstanding game against Naija Ratels today by a wide margin. But they must still beat Bayelsa Queens to pip them to the title and the ticket to the CAF Champions League competition.