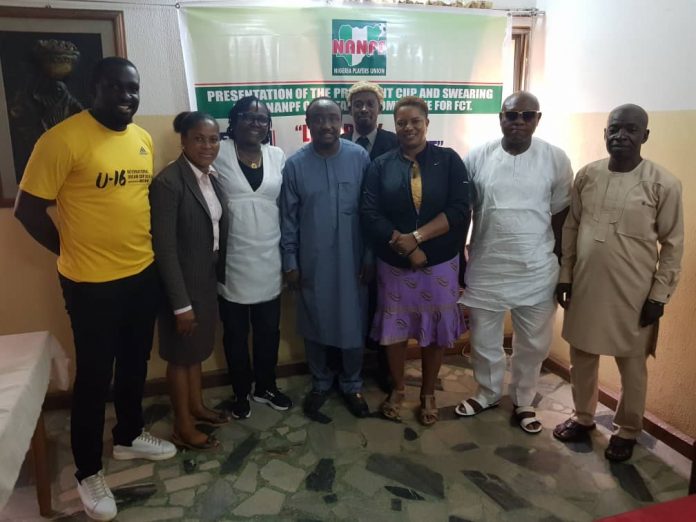 The event which was held in Abuja at the A’Avision Hotel, Area 3, had the national body inaugurate a 7-member committee that will run the affairs of the Association in the FCT for the coming months before new executives are elected.

Jubril Yusuf Kenny will serve as Chairman of the Committee while Bar. Victoria Nlemigbo as Secretary.

The President urged members of the committee to go out and get the job done, stressing that he has got big faith in the team.

“I want to ask you to go and do the job because there are a lot of things needed to be done in Abuja. You have a lot of players in Abuja, the Secretary has always been on ground but now, he will be needing you guys to help him out. I am sure that you guys can do the job” he said.

Babangida also handed over the trophy of the ‘President Cup’ to the Chairman Organizing Committee, Clement Temile, which marks the kick-off of preparations for the competition that has been set aside for ex-professionals in the round leather game across the federation.

Also speaking at the sidelines of the inauguration and presentation of the trophy, Babangida explained that the President’s Cup will be an annual event and it will continue after his stay in office.

He, therefore, urged footballers to identify with the Association, adding that the competition will be for both male and female ex-professionals.

“This ‘President Cup’ is an annual event and it will definitely continue after Tijani Babangida. So, as long as you have a president, you will always have a President Cup.

“The Cup is also meant for ex-players across the federation so that people who do not play anymore can be engaged.”

The former international went further to appeal to ensure they are registered and be card-carrying members of the Association.