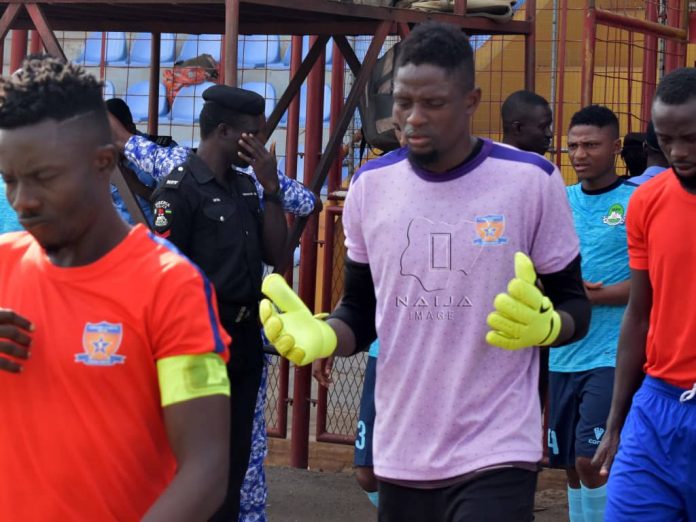 Sunshine Stars goalkeeper, Soliu Suleiman Dogo has insinuated that his quest to strive to become a famous goaltender like other notable goalkeepers in the Nigeria Professional Football League.

Soliu moved to the Akure based club at the beginning of the season after plying his trade with National League side, ABS of Ilorin for some seasons and the goaltender has been involved in all the eight matches the club has played this season bar the home game with MFM on Thursday afternoon which he is expected to start too barring any last-minute injury.

The goalkeeper hailed the contributions of his other netminders at Sunshine Stars namely David Ariyo, Ojo Olorunleke and Henry Ayodele for the brand they have created for themselves in the league and he insists that he is poised to follow their footsteps in his determination to become a top goalkeeper too.

“I have to praise my teammates at Sunshine Stars who are goalkeepers too. David Ariyo, Ojo Olorunleke and Henry Ayodele are already at the top and they are giving me the necessary encouragement to become a good goalkeeper too,” Suleiman Dogo told Dasportstainment247.com.

“I am just doing my best to also become like them. I want to become a good goalkeeper also. I have been giving my best at training sessions and during the games that we have played this season. I will continue to do my best to get the attention of the technical crew.

“I know that MFM are a good team but we want to consolidate on our away win against Adamawa United in Gombe. We have noticed that all the teams that won their games away have found it difficult winning their next home game after they performed very well away. We do not want to be like them. we will take MFM to the cleaners and assume a better position on the league table.”

The former ABS goalie opined that the determination to end Thursday in the second spot with a home win is their motivation ahead of the 90 minutes and they do not want MFM to stand in their way and their quest to move to the second position.

Soliu has kept eight games with three clean sheets including their 3-0 away win against Adamawa United.