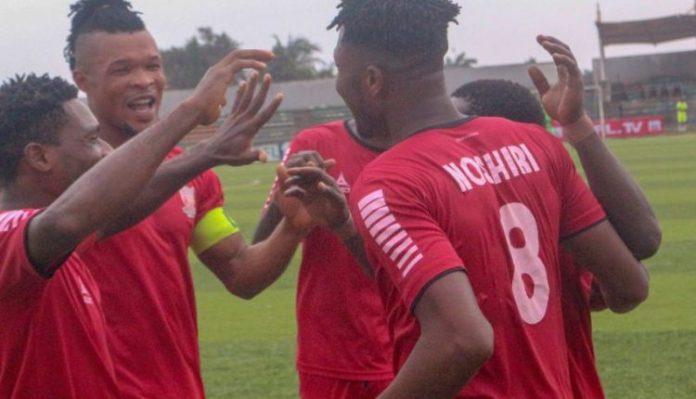 Heartland FC missed a golden chance to move up the ladder of the Nigeria Professional Football League table after playing an off-colour draw at the Dan Anyiam Stadium, Owerri on Sunday in a Matchday 17 fixture.

The Seasiders silenced the home fans with the opening goal in the 14th minute through an ex-Heartland Striker, Efe Yarhere before the Naze Millionaires restored parity in the 44th minute through Kingsley Maduforo.

Heartland head coach, Fidelis Ilechukwu named an unchanged side to the team that defeated Wikki Tourists in Owerri on Wednesday while the caretaker manager of Warri Wolves, Paul Offor made four changes to the team that was held to a goalless draw at home by Jigawa Golden Stars.

It was Heartland FC that created the first real chance of the game with purposeful attacking forays in the opening 10 minutes but the Seasiders’ defence led by Innocent Orukpe, Walter Ighoakpokrire, Wisdom Jumbo and Chimezie David did everything to repel their hosts early onslaught.

Despite starting the game impressively, Heartland were still making schoolboy errors in the defence which Uche Ihuarulam and Efe Yarhere almost capitalised on in the 11th and 13th minutes.

The home team were however a goal behind in the 14th minute from another defensive blunder. Warri Wolves’ Daniel Ijeh launched a long thrust into the Naze Millionaires half and Uche Oguchi in an attempt to nod the ball out of danger headed backward towards his goal area and ex-Heartland hitman, Efe Yarhere received the back pass on a platter and fired past onrushing goalkeeper, Chijioke Ejiogu who was badly exposed for the curtain-raiser.

Heartland had two decent chances with which to equalise in the 32nd minute but Kingsley Maduforo’s effort was cleared onfollow-up the goal line while Pascal Eze blasted a follow-up shot to give Warri Wolves a respite.

The Naze Millionaires however managed to get the equaliser just before the halftime break through Maduforo. Pascal Seka had initially played a pile-driver which Goalkeeper, John Lawrence spilled and Maduforo was alert to bundle home the rebound.

There was nothing much to separate both sides in the second half with chances created few and not clearcut. Warri Wolves were initially contended with defending their goal area while leaving Yarhere and Emeka Uzor with occasional forays into Heartland’s goal area through counter-attacks.

The Seasiders thought they had won the game when Uzor fired past a displaced Ejiogu in the 72nd minute but the referee adjudged that the goalscorer was in an offside position to the relief of the home team.

The final chance of the game fell to Heartland’s Amah Chibundu who was a late substitute and would have written his name in gold had he converted from six yards in the 95th minute. Chibundu miscued his shot when he had a yawning net at his mercy with Wolves’ goalkeeper, John Lawrence already displaced. But his defender, Olalere Oluwasegun quickly cleared the ball before the referee signalled the end of the game.

Heartland Assistant coach, Ezekiel Onyegbule praised the doggedness of Warri Wolves whom he claimed came all out for the point and he however expressed that the Naze Millionaires would go in search of the lost points when they visit Kaduna as guests of Kano Pillars on Sunday.

“Warri Wolves came all out to spoil the day for us but our strategy was cut off by them. I know we have also won and drawn away. We will get it right. We are going for another away game and we will try our best to continue with our good away form,” Onyegbule told npfl. ng.

“The boys were unlucky because we had numerous chances to win the game but we missed them. It wasn’t our day.

“This team needs massive encouragement and support. Fitness goes a whole lot of ways. It is both physically and psychologically.”

On his part the interim coach of Warri Wolves, Paul Offor was delighted the Seasiders have been rewarded for their patience after their near misses in Ilorin to Kwara United and Bauchi versus Wikki Tourists which theylost by a lone goallll each.

He affirmed that the spoils shared in Owerri would spur Warri Wolves players more to go in the hunt for more points both home and away with more time for them to preparee for their next Sunday opponents.