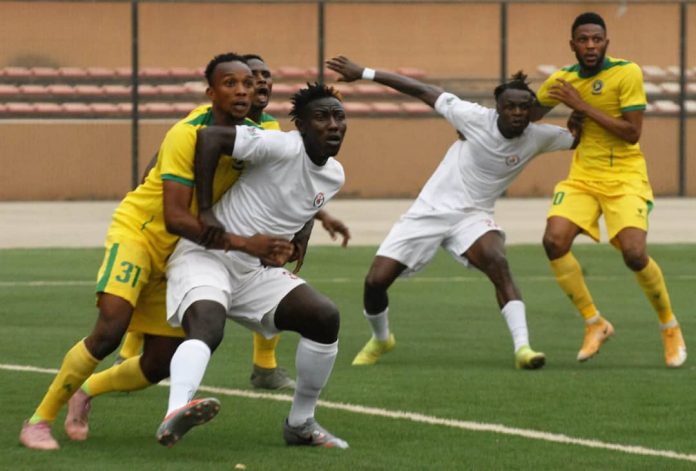 Enyimba edged closer to the top of the NPFL after they defeated Sunshine Stars 1-0 at their banished home ground of the Agege Stadium, Lagos today.

The People’s Elephant still smarting from their 2-1 away loss to Orlando Pirates in Soweto in a CAF Confederation Cup Matchday Two tie last midweek got down to work immediately to atone for their stuttering performance in South Africa.

Their persistence later paid off in the 55th minute when Samson Obi was allowed to fire into the gaping net after the Owena Whales’ defenders failed to deal with Enyimba goalkeeper, John Noble’s well-taken freekick.

NPFL joint leading scorer, Sadeeq Yusuf missed some golden chances that could have levelled the tie and handed initiatives to them but he fluffed them as Sunshine Stars collapsed to anotherr agonising defeat.

Enyimba have moved to the fifth spot with 27 points from 13 games. They still have three games at hand while Sunshine slipped up to the 14th spot with 18 points.

The vital home win restored Rangers back to the second spot with 30 points from 17 games. The Flying Antelopes pushed Kano Pillars who shocked Wikki Tourists 2-1 in Bauchi to the third position. Sai Masu Gida also are with 30 points.

Dakkada shocked Plateau United by a lone goal to record their first ever win over the former league champions.

Isaac George’s 28th minute effort handed the maximum points to the Chosen Ones in a high octave game played in Uyo.

Dakkada have moved to eighth spot with 26 points from as many matches while Plateau United are in the lower part of the table. They are placed 12th with 22 points.

The last Matchday 17 tie will be played tomorrow morning in Enugu between FC IfeanyiUbah of Nnewi and Jigawa Golden Stars. The Anambra Warriors have been ordered to play their next two home games at the Nnamdi Azikiwe Stadium, Enugu because of the violence that marred their goalless draw at home to Rivers United in Nnewi.