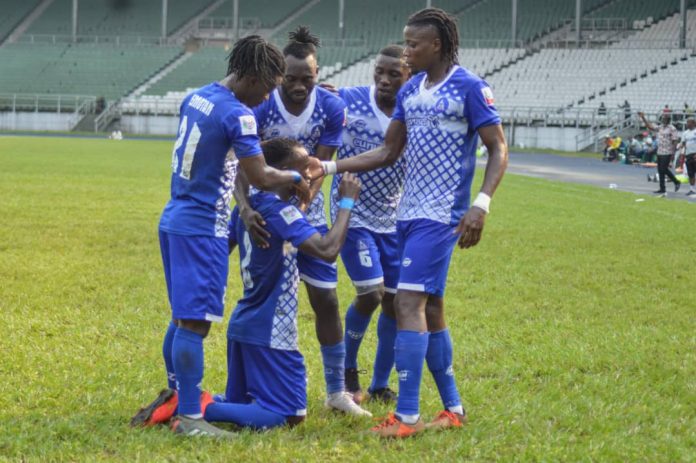 .Thrash Bloemfontein Celtic 3-0 to set up intriguing fixture with Enyimba

The owner of Go Round FC and a philanthropist par excellence, Bro. Felix Obuah had promised to give Rivers United N1,000,000 (one million naira) for a win and additional N200,000 (two hundred thousand naira) for each goal they scored against Bloemfontein Celtic in the return leg tie. They have now earned N1,000,000 for the win and N600,000 for the three goals they scored.

The Pride of Rivers won the first leg 2-0 in Bloemfontein and have cruised to the playoffs round 5-0 on aggregate to set up a dream fixture with Enyimba, another Nigerian club that dropped to the second tier African club competition from the lucrative CAF Champions League after defeat to Al Merriekh of Sudan.

Rivers United set up an intriguing tie with Enyimba for a place in the group stage of the CAF Confederation Cup after they completed a routine 3-0 win over Bloemfontein Celtic in the second leg of their first round tie in Porto Novo on Saturday.

Godwin Aguda scored a first half double in the 1st and 45th minutes and Fortune Omoniwari added a third four minutes after the break to complete a 5-0 aggregate drubbing of the South Africans.

Both players were on target in the first leg and Aguda who joined the club in the off-season now has five goals in the qualifiers.

The match was played at the Charles de Gaulle Stadium in Porto-Novo, Benin Republic with the permission of CAF after Nigerian health authorities declined to issue a waiver for Bloemfontein Celtic to circumvent local Covid-19 protocols for international visitors leading to the cancellation of the original fixture on 6 January 2021 in Port Harcourt.

Nigeria is now guaranteed a club in the group stage of the tournament and the encounter between Enyimba and Rivers United offers the bitter rivals the chance to settle a lingering dispute from the end of last season on the pitch.

Rivers United were involved in a long-drawn battle with the League Management Company last year over the decision to place them 3rd and Enyimba 2nd on the NPFL table using the Points Per Game (PPG) calculation.

Enyimba qualified for the Champions League as a result but after falling through the cracks in the qualifiers, Rivers United can exert revenge by ensuring the Aba side are knocked out of the continent entirely when they meet next month.

The People’s Elephant will host Rivers United in Aba in the first leg slated for Valentine’s day while the return leg holds in Port Harcourt’s Adokie Amiesimaka Stadium a week later with the winner on aggregate in both legs qualifying for the group stage of the CAF Confederation Cup.