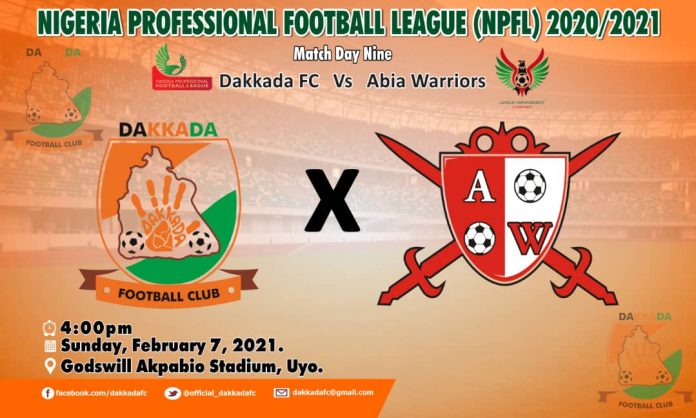 Enyimba and Plateau United raised the curtain on a bumper weekend of NPFL Matchday 9 action, on Saturday, at Enyimba Stadium, Aba with the home team victorious by 2-1, while the rest of the fixtures will cascade through to Monday including a huge clash at Godswill Akpabio Stadium, Uyo, Sunday, which sees Dakkada and Abia Warriors go toe to toe with each other for only their second elite division meeting.

The NPFL table makes for a horrible viewing if you are a fan of Abia Warriors at the moment – you would be forgiven if you thought the table read upside down.

Although Warriors occupy a strange position in the standings but they appear to be peaking when everyone else is flagging even as they extended their unbeaten run to four matches in some style with their first win of the season on Wednesday when they brushed aside Sunshine Stars in a 4-1 home win.

Dakkada welcome back their Head Coach Umar Danlami who was on national team duty and one of his first assignments will be to raise the confidence levels of his charges after a not-so-good outing in Enugu. They seemingly paid the price for an attritional and negative approach which directly handed Rangers the initiative from the get-go in a 3-0 drubbing last Wednesday thereby earning them an unwarranted joint worst-ever top flight defeat.

But Dakkada have demonstrated an admirable ability to bounce back from difficulty situations in the past especially when they defeated Warri Wolves recently after a disappointing home loss to Sunshine Stars on the prior Match Day.

The Chosen Ones looked poised and appeared to have dumped Wednesday’s experience to the ash heap of history where it belongs during Friday’s training session and it is not beyond their ability to orchestrate a winning formula to stifle Warriors and bring the visitors’ unbeaten run to an end.

Despite having what looked a legitimate goal ruled out, Dakkada were ridiculously sparkling in a 1-1 draw away to Abia Warriors last season – the only previous top flight meeting between the pair. Although a lot has changed at both sides in terms of playing personnel including the departure of Dakkada’s solitary goal scorer on the afternoon, Eso Archibong, but Dakkada will be hoping to bring a bit of last season’s stardust to the fore tomorrow.

The exodus which hit Dakkada at the end of last season means that Abia Warriors parade three of Dakkada’s old boys. Striker Utibe Arit, defender Harrison Ibukun and goalkeeper Vincent Edafe now don the colours of the Umuahia-based outfit and like it was in Enugu, the trio will be reuniting with some of their old colleagues.

Warriors’ Coach Imama Amakakpobo appears to have found a more stable starting eleven in recent times after his spasmodic selection pattern in the wee stages of the season.

Against sunshine Stars, he made just one change to his prior start list with the inclusion of Kabiru Muhammed in place of Goodluck Ozioma and the trick paid off with warriors scoring all of four goals in a single NPFL match for the first time in over three years – the last time they scored over two goals in an NPFL match was a 3-0 home win over Plateau United on December 29, 2019.

If Imama stays par for the course then chance are that both Utibe and Ibukun will face their former club tomorrow while goalkeeper Vincent Edafe, who appears to have been frozen out of the set-up since a 1-3 home loss to Jigawa GS on Day Three.

Whatever this unpredictable NPFL season serves up in Uyo, Dakkada will know that a win in Sunday’s contest is desperately needed to release the pressure valve.