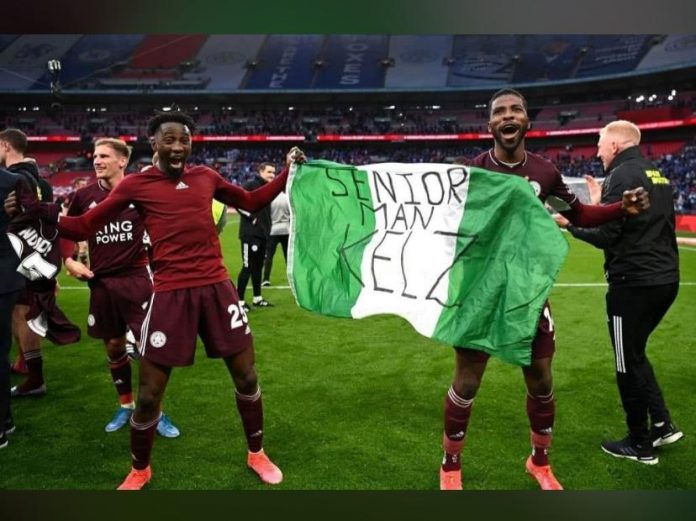 He paid glowing tributes to the two Nigerians in the team,
Kelechi Iheanacho and Wilfred Ndidi for leading their football club, to achieve the feat after a 1-0 win over Chelsea at the Wembley Stadium on Saturday.

Uchegbulam said it was a pride that the duo had made history as the team members that helped Leicester City football club to win the English FA league for the first time ever.

He noted that other Nigerians, Daniel Amokachi, kanu Nwankwo, Celestine Babayaro, John Mikel Obi, Victor Moses and others are some Nigerians who had achieved the feat in times past.

The FA chairman congratulated the two footballers even as he charged other Nigerian football players to excel wherever they are, saying the people are known for laurels.

Uchegbulam was particularly delighted with the progress of Kelechi Iheanacho who is a product of Imo under 13/15 programme in 2007/2008 and has consistently made Nigerians proud.

Further, the Imo FA took note of Iheanacho’s celebration wrapped in Nigeria flag which exibits great love for his country, an indication that he actually imbibed the State football Association orientation taught him years ago.

The Imo FA believes that the reappointment of Ogu is a wise decision and will help boost the interventions already introduced in the ministry.

While we congratulate Ogu, we wish to remind him that it is a call to higher duties and the need to redouble efforts in the ministry.

Ogu since assumption of office has discharged his duties with commitment and built synergy with the different stakeholders in the industry.

Further he has discharged his duties devoid of noise and fanfare, especially for instituting formal contracts for players and officials in Heartland football club which has helped to bring stability in the team.

The Imo Football Association calls on the Commissioner to ensure that under his watch, sports receives a boost because if well managed, it is an avenue to engage the teeming youths, away from social vices.

In a related development, the chairman has announced the appointment of Mrs Angela Nkwo-Akpolu as the media officer for the State Football Association.

Nkwo-Akpolu, a member of the Nigerian Association of Women Journalists (NAWOJ), who has over 20 years experience, was media aide to former Imo First Lady, Barrister Chioma Ikedi-Ohakim.