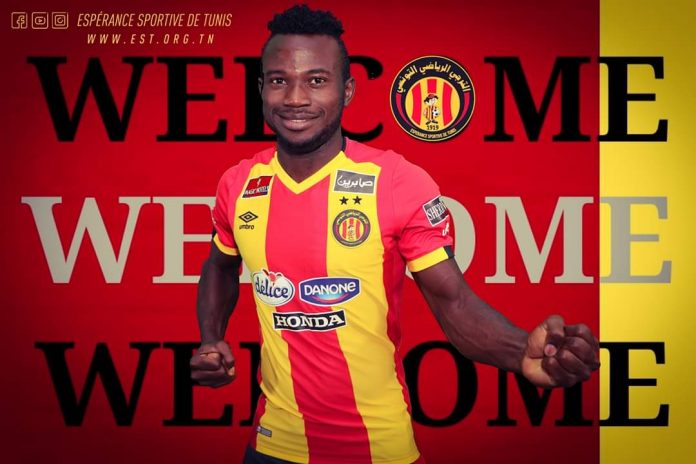 Tunisian giants Esperance have unveiled their latest acquisition from Nigeria by the name Samuel Pilla Atavti who sealed a three-year move from neighbouring club, Stade Gabesien.

Atavti became a sensation who was eventually captured by the Tunisian League champions after he performed brilliantly for Stade Gabesien last season even though his best couldn’t keep them in the topflight beyond the past season.

He was discovered during a tournament organised by his kinsman, Moses Orkuma in Gboko and it was his outstanding performance during the tourney that made him be recommended to Stade Gabesien.

He didn’t rest of his laurel when he arrived Stade Gabesien at the beginning of last season and after he passed the trial sessions organised for him he was signed by the club.

Atavti was unable to spend a second season with Stade Gabesien because of their demotion to the lower league and the Tunisian Football Federation rules and regulations that forbid foreigner from featuring in the lower league.

The Benue born defender got another chance in the topflight with Esperance who invited him for another trial and he has been given a three-year deal after he impressed during the test games organised to gauge his performance level.

The right-back told SportingLife that he is amazed at the turn of events in his budding career and that he will continue to do his best to ensure that he plays for the first team of Esperance.

“I was unveiled two days ago but I signed some days back,” Atavti told SportingLife.

“I am grateful to God for his mercy and miracle in my life. I know that I still have a career in front of me. I will continue to give my best.”