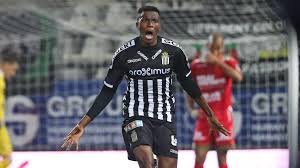 Nigeria International, Victor Osimhen’s sensational double for Lille in their 3-0 whiplash of Saint Etienne in a French Ligue I tie played on Wednesday night has shot him to the top of the scorer’s chart with four goals thus far from only three matches in the French League.

These two goals have also helped his French Club, Lille to the fifth position on the Ligue I table after they humiliated Saint Etienne in a Matchday Three tie played on Wednesday evening.

Osimhen who heralded his welcome to the French League with two goals in their 2-1 home win against Nantes made it a return to winning ways to the former league champions against Saint Etienne after their 1-0 collapse to Amiens last weekend.

The former cadet star started from the bench after he was overlooked by coach Christophe Galtier but he replaced ex-Chelsea striker, Loic Remy who was injured and was substituted in the 19th minute of the encounter.

Osimhen scored his first goal of the game in the 37th minute after he connected a beautifully laid pass from Domagoj Bradaric which he stopped with his right before rifling home a precise shot with his left leg and his second goal which was Lille third against Saint Etienne was from another inviting cross from the right-wing into the vital area of the visitors in the 74th minute.

He stopped the ball with his right leg this term and fired a shot with the same leg for his fourth goal of the season in the French Championnat from just three games.

It was the final straw that broke Saint Etienne’s resistance after Jonathan Bamba increased Lille’s tally in the 69th minute from the penalty spot.

The Under 23 international is now the leading marksman in the French league with four goals ahead of Moussa Dembele (Lyon), Memphis Depay (Lyon) and Habib Diallo (FC Metz) who have three goals each after the conclusion of the third game.

His goals have also guided Lille to the fifth spot in the league table with six points from three games ahead of their visit to Reims on Sunday in the continuation of the French League season.