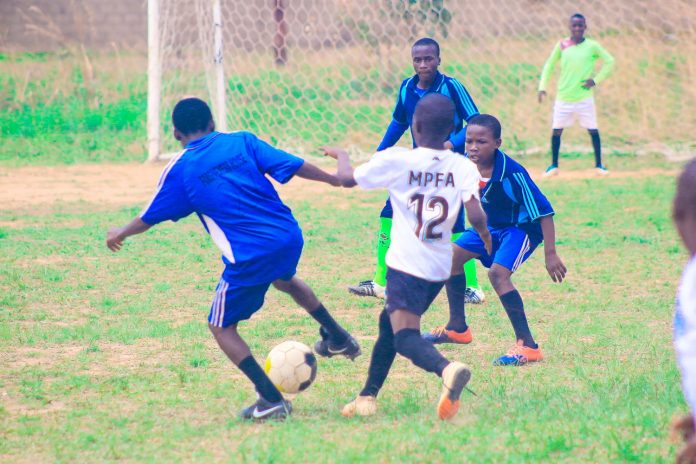 Week 11 fixtures of the Tsenba Wummen Football League in the Under 14 & 16 were successfully negotiated last weekend with more exciting, some unexpected results and more goals plundered from the 19 games played across four centres in Jos, Plateau State reports www dasportstainment247.com.

31 goals were scored in the Under 14 cadre with two games producing the highest goals margin with 12 goals combined in both games. Vet Glory got thrashed by irrepressible Mees Palace Football Academy 4-2 while Relentless Football Academy whitewashed Young Champions 5-1 in another six-goal thriller.

In the Under 16 category, 34 goals were netted by razor-sharp attackers from the nine games that were played. Yard FC and Tin City FA tie was postponed to a later date. Rahbam FA made mincemeat of poor Mabo Young Stars with an 8-0 whiplash of the bottom-placed side for the biggest winning margin while Jeddy Academy and SJC Lions tie which produced seven goals was another high scoring fixture in the last weekend games.

Highland Stars continued to keep pace with league reigning champions, Mees Palace after they whipped their foes, Multiple Waves 3-0 to move to within one point of the leaders, Mees Palace in the second position. They have 28 points from 11 games after they earned their ninth win of the season last weekend while Multiple Waves remain in the ninth spot with 16 points.

Relentless FA however returned to winning ways after two consecutive draws with a 5-1 touncing of Young Champions. They have slipped up in the title race to the third spot with 27 points after they could only play a 3-3 draw in their re-arranged fixture with SJC Lions. A win in that game would have seen them drawn level with Mees Palace on 29 points. The humiliated Young Champions are in the 12th position with 13 points.

Jazzy Stars made it two straight victories after a close 1-0 win over SJC Lions. They have moved to the 10th spot with 15 points. In another game, Elspuron stumbled further in the title race after a disappointing 1-1 draw against midtable, Gangere Youths. They are fourth with 23 points but are six points away from leaders, Mees Palace having drawn their last two games.

Meanwhile, Mees Palace FA continued to dominate the league albeit with serious competition this season from Highland Stars and yet-to-be-beaten Relentless FA. The titleholders got the job done for their ninth win of the season from 11 games after a 4-2 whitewash of seventh-placed, Vet Glory. They improved to 29 points but cannot afford to relax with only two points separating the top three.

While Highland Stars and Relentless FA are not giving Mees Palace breathing space in the Under 14, St. Monica Academy and FC Izam have emerged as their albatross in the Under 16.

Rahbam FA got the result of the day after they dismantled bottom side, Mabo Young Stars 8-0 in a rather one sided affair. It was a return to winning way for them after they played a 4-4 draw with Tin City FA two weeks ago. Rahbam complete the unchanged top four with 23 points from 11 matches.

Jacob Prince scored a hat-trick for Jeddy Academy but he still ended on the losing side after their adversaries, SJC Lions notched four goals of theirs in a 4-3 painful defeat. SJC Lions moved to the 12th spot with 13 points but Jeddy Academy slid to 15th on the table with 10 points.

Galatians humbled Adalchi FA 4-0; Jazzy Stars thrashed FC Sports 3-0 while the Flying Shooters aimed at the Royal Stars’ jugular with a 3-2 win. Flying Shooters shot to the 10th spot with 16 points from 11 games while Galatians and Jazzy Stars are in the sixth and eighth spots respectively with 18 and 17 points.

Mees Palace FA defeated Top Free Academy 3-0 to make it 10 consecutive wins. They are atop the league table with 30 points from 10 games. They still have a game at hand.