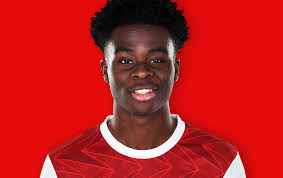 After emerging as Arsenal best player for December last year, England raised with Nigeria roots, Bukayo Saka is among the five frontrunners again for the coveted prize for January.

Saka has been among the Gunners star performer before he got injured on Jamuary 28th while he Is expected to resume training as from Wednesday from groin/pelvis complaint.

After Arsenal managed to get their rhythm in January, the Gunners have five strong contenders vying for the prize this for the month of January.

First up is Alex Lacazette, who has performed admirably up front and scored twice in our victory at West Bromwich Albion, as well as netting against Southampton. The French forward also claimed two assists over the course of the month.

Or will your vote go to last month’s winner, Bukayo Saka, after another stellar string of displays? The England international scored three times – against West Brom, Newcastle and Southampton – and also set up Lacazette’s goal at St Mary’s.

Emile Smith Rowe has made such a positive impression since coming into the team – so does he deserve your vote? The attacking midfielder claimed two assists at West Brom, another one against Newcastle, and also netted against the Magpies in the Emirates FA Cup.

Have Rob Holding’s rock-solid performances at the back done enough to get the nod from you? The centre back has been in imperious form and helped us to four clean sheets in the Premier League in January – as well as signing a new long-term contract.
final contender is Kieran Tierney, who has proven central to our good form with a series of outstanding performances – as well as scoring a stunning strike against West Brom, and claiming two assists over the course of January.