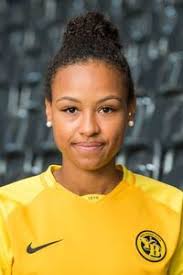 FC Zurich of Switzerland striker, Onyinyechi Zogg has expressed her excitement at making her debut for the Super Falcons.

Zogg got her maiden game for the senior women’s national team in their 1-0 loss to Jamaica in the first game of the United States Summer Series Four Nations Tournament and the player told the team’s media department that she was proud to adorn the green white jersey of Nigeria.

“It is a huge honour to play for the Super Falcons. I was very excited to get my debut and to wear the jersey,” Zogg told Super Falcons’ Media in quotes used by www.dasportstainment247.com.

The Zurich player rated her performance against Jamaica above average and said she hopes to do better if given a chance against Portugal.

She charged the Falcons to show more hunger and desire to win against Portugal than they did against Jamaica and she described the atmosphere in the team’s camp as cordial and encouraging.

“It was very okay but I think I could do much better. It is just that I have to get used to everything.

“We talked a lot about the game with Jamaica and we are expecting more against Portugal. We need to have more solutions and fight more.

“It is very good and they are very lovely to me. I love the team. It is a very good vibe out here and I am just in love with it,” she concluded in quotes made available to www.dasportstainment247.com.