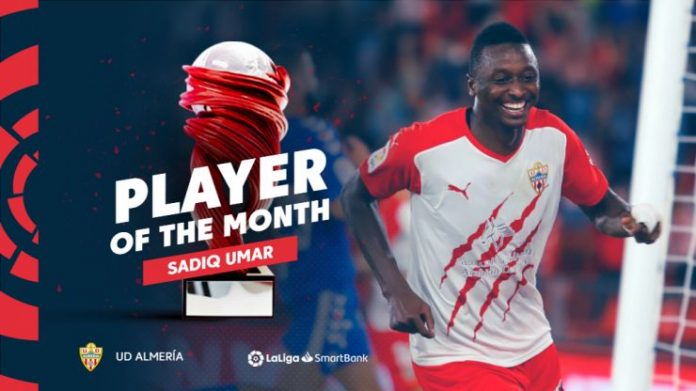 Sadiq Umar has emerged as the LaLiga SmartBank Player of the Month for February.

The Almeria striker received the Player of the Month Award for February, after playing a key role in helping his club to remain unbeaten on every matchday over the course of the month

The goals and positive play of UD Almeria’s frontman helped his team string together a four-game unbeaten run and scoop up all of the points on offer in the month, strengthening their hold on second place in the silver tier just one point behind the leaders, SD Eibar.

He netted five goals in the four games played in February and provided two assists in front of his home fans, one against UD Ibiza and another against CF Fuenlabrada. He notched a brace against CD Mirandes, which was decisive in claiming the three points up for grabs, and he secured victory for Rubi’s side again with the only goal of the game against Malaga CF at La Rosaleda.

Now in his second season with the Andalusian outfit, Sadiq Umar has scored a total of 13 goals in the 25 games played this term. The industrious striker has a superlative scent for goal and is very much a team player, having made seven assists to bring his teammates in on the goalscoring action.

The Almeria number 9 follows in the footsteps of UD Ibiza striker Sergio Castel, January’s winner of the accolade, garnering more votes than the other candidates for the Player of the Month, including Jaime Seoane (SD Huesca) and Jose Corpar (SD Eibar).