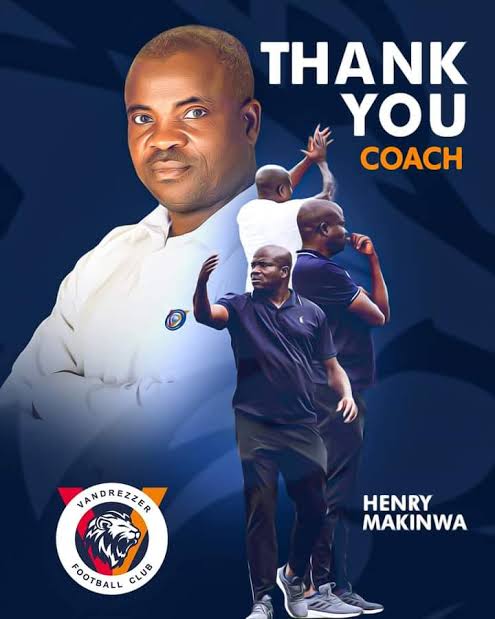 Former Katsina United gaffer Henry Makinwa has cleared the air on why his romance with Vandrezzer ended abruptly after four months in charge of the team.

Contrary to what some media houses have reported that Makinwa was sacked by Vanderrezer, the former Victoria Setubal of Portugal talisman while speaking to the media said, the contract was terminated after due consultations between him and the management.

“I believe both parties are not happy with the decision because it was meant to be a long term project but since we couldn’t agree on some certain terms, we decided to terminate the contract on mutual consent. And it was stated clearly on the official social handles of Vandrezzer FC that the contract was mutually terminated.

“I still have a very good relationship with management and the owner of Vandrezzer. They are good peole.

“I think I have the best of project with Vandrezzer as I was able to mould unknown players between 17 and 18 years of age without experience to occupy 3rd position on the NNL Group A table behind Insurance and Gateway United up until the 16th week. If we didn’t have issues with logistics and fatigue didn’t set in, the boys would contend to even finish 1st on the log.

“Travelling from Uyo to Lagos to honour home matches and from Lagos back to Uyo to train is too tough on the players.” He clarified

Makinwa who is a UEFA PRO licenced coach continued,

“I have done a lot of things here in Nigeria and I want to build on that, I have developed players, being with ABS and got promoted with them from NNL to NPFL. I was with Katsina United, we ended the league in 7th position, arguably their best season since they returned to top flight league ti date and i won the first away match for them since four years. I was also with Abia Warriors and had a good time with them.

He added that with the new season coming up, he hopes for good offers from NPFL Club sides as he wants to win the league in the top division of Nigerian football.

“The new season is coming up and I am sure of better offers in the NPFL so I would be able to vie for the league because it is my time to win the league”.

Coach Makinwa has before now managed top NPFL Clubs like ABS, Katsina United, Abia Warriors before his last stint with Vandrezzer in the NNL.

Imo SWAN eulogises the life and times of Tessy Nwoke