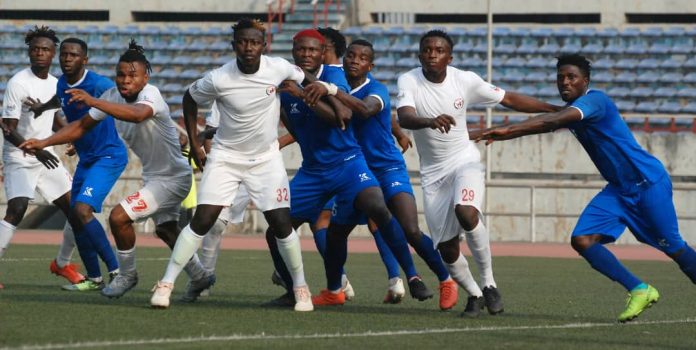 The very fine form that has seen seven-times Nigeria league champions, Rangers International F.C of Enugu chalk up ten of the available twelve points at stake over four match days of the NPFL 2020-21 season was halted as resolute defending from visiting Lobi Stars ensured that the spoils was shared at the end of proceedings in Enugu on Sunday.

Rangers’ head coach, Salisu Yusuf made three changes to his matchday 5 squad that were forced to a 1-1 draw by MFM in Lagos with Shedrack Asiegbu, Osas Okoro and Israel Abia making the cut for a starting place and it was wave after wave of attacks by the ‘Flying Antelopes’ but the visitors were resolute in their defending.

As early as the second minute, Christian Nnaji had an opportunity to put the host in front after he was set up by an Okoro’s inviting cross but despite looping the ball over onrushing Moses Ocheje, the ball did not find its way into the yawning net as the visitors’ defenders reacted well to clear the danger.

Dauda Madaki had a wonderful game as his pace and dribbling skills was a handful for Lazarus John at the right-back but his crosses left much to be desired as Ocheje was always alert to make easy catches.

The visitors’ backline of Alex Aghahowa, Moses Tsehuan, Ebube Duru and Duke Osimaga did a good job of their duties in ensuring supplies did not get to Rangers front men and the few times that they were breached, Ocheje was at hand to foil the danger.

Despite early substitutions that saw the duo of Shedrack Asiegbu and Christian Nnaji make way for Kenechukwu Agu and Femi Ajayi at the half hour mark, the visitors failed to bulge to all that was thrown at them.

Not even the referee’s marching order given to Ossy Martins with twelve minutes left on the clock for elbowing one of the Flying Antelopes’ players,could tilt the game in the hosts favour as the further introduction of Ifegwu Ojukwu, Godspower Aniefiok and Chidiebere Nwobodo could not break down the visitors’ defence.

Goalkeeper Nana Bonsu of Rangers, who in spite of his mother’s death In the morning of the game in far away Kumasi, Ghana, was at his best to keep his side in the game on two occasions when Chinonso Okonkwo and Ossy Martins were clear on goal.

Yusuf said after the match, “It was a good game. In the game of football you don’t win all the time even when Lobi Stars gave us a very good fight to earn a draw. There were some lapses from us on the field of play and we deviated from our style of play, became jittery and could not find our rhythm which made it difficult for us to score. However, we focus on the next game.”

Lobi Stars stretched their unbeaten record in Enugu to three matches as they retain their third position on the table with 11 points from six games as they welcome Abia Warriors to Makurdi on Sunday while Rangers who are also unchanged in the fourth position with 11 points from six games. They visit Akure next as guests of Sunshine Stars on Sunday.