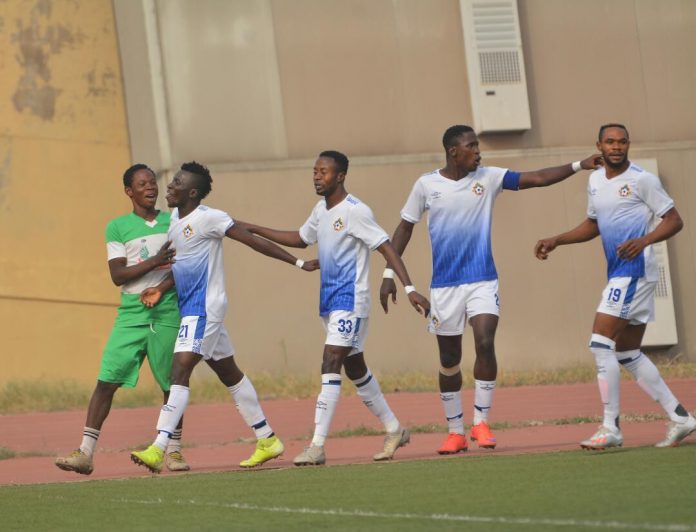 Warri Wolves slipped to 15th spot on the log from 13th position in the previous matchday after they were beaten by Nasarawa United 2-1 at the Ozoro Polytechnic playing ground on Sunday.

The Seasiders thought it would be another routine home win when experienced Uche Ihuarulam put them in a shocking lead in the 21st minute but the Solid Miners left it late and scored two goals through Silas Nwankwo and Chinedum Ohanachom in the 63rd and 78th minutes to record their second away win of the season.

Nasarawa United who have now gone unbeaten in their opening six games have jumped to the top of the table with 14 points ahead of Rivers United (12 points from five games) who play their outstanding game in Kaduna on Wednesday versus Kano Pillars.

The Solid Miners will make a short trip to neighbours, Plateau United for Matchday Seven tie in Jos this weekend while the Seasiders visit troubled Dakkada FC in Uyo at the same period.

At the Okigwe Township Stadium, Abia Warriors couldn’t make their change of home ground count as they were held to a goalless draw by MFM in their first home game since they left Aba’s Enyimba International Stadium after their 3-1 loss to Jigawa Golden Stars almost two weeks ago.

These are trying times for Abia Warriors head coach, Imama Amapakabo who is yet to record a win after six games. His team has only bagged two points since the three games marching orders from the Abia Warriors management about a fortnight ago. It is uncertain if the hammer won’t fall on the former Super Eagles Assistant coach before their weekend game with Lobi Stars.

MFM have nine points from six games to move a spot up to the seventh spot but Abia Warriors are still in the relegation zone with mere two points.

At the Godswill Akpabio Stadium, Uyo, Dakkada‘s 2-1 home defeat by Sunshine Stars made it an uneventful day for Akwa Ibom teams after Akwa United’s controversial loss in Owerri.

The Owena Whales’ head coach, Gbenga Ogunbote decided to make a dying minute change in the starting 11 with the replacement of Kehinde Adeyemi for in-form Sadeeq Yusuf and the decision defined the game for Sunshine Stars who bagged their first away win of the season in Uyo.

Yusuf scored his third and fourth goal of the season in the 12th and 67th minutes to put Sunshine Stars in commanding lead but Jebam Edet’s goal for Dakkada in the 71st minute threatened a fightback which never came.

Sunshine moved five spots up to sixth from 11th position with 10 points from six games but Dakkada who are called the Chosen Ones crashed to the 11th spot from the seventh position due to the home loss. They have eight points from as many games.

The Harmony Boys home win has catapulted them to the fifth spot from the ninth position they previously occupied before the start of the game but FC IfeanyiUbah slid a place down to the 18th position with four points from six games.

The Promise Keepers dominated the early exchanges and deservedly shot ahead in the 34th minute after a defensive mix up handed the opening goal to Mfon Udoh on the plate. Pascal Eze’s desperate clearance richocheted the body of Ayo Adetola and it fell to Udoh who was left unmarked face to face with Goalkeeper, Ikechukwu Ezenwa with the easiest task of drilling the ball past the goaltender.

Heartland chance came in the 52nd minute from the penalty spot when the referee blew for an infringement in the Akwa United vital area even when it seemed no contact was made. Samuel Nnoshiri eventually converted the spot kick for the equaliser while Pascal Eze seemed to have scored the match-winner from an offside position in the 80th minute.

Earlier, Katsina United played a goalless draw at home to Plateau United on Saturday at the Muhammadu Dikko Stadium, Katsina in a repeat of the game played during the Governor Masari Preseason Tournament which the home team won 4-0 then.

The Peace Boys improved to eight points from six games but they remained unchanged in the ninth position while the Chanji Boys’ impressive pre-season activities have been hard done by their far from stellar results since the season kicked off last month. They are 13th on the log with seven points from six matches.

Enugu Rangers couldn’t beat Lobi Stars again at the Nnamdi Azikiwe Stadium for the third straight game as the tie ended goalless even with the Pride of Benue reduced to 10 men in the final 10 minutes through Ossy Martins’ dismissal.

It was the first time the Flying Antelopes will be dropping points at home this season having beaten Akwa United, and FC IfeanyiUbah on their home turf already this term but Lobi led by Kabiru Dogo with masterclass tactics were able to return home with spoils shared. Rangers and Lobi Stars’ position remained unchanged at fourth and third respectively with 11 points.

Volleyball: Nigeria through to semi-final of 2021 African Nations Cup