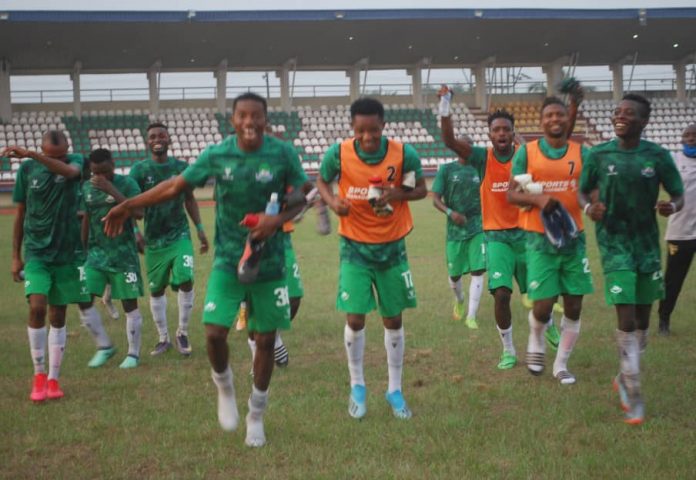 Nasarawa United were looking for a back-to-back NPFL win for the second time this season but it would be a tough task as they were hosted by a Warri Wolves side looking to move into the top ten position following a 3-0 home win against Katsina United a week ago.

The hosts made a flying start and it took them just twenty-one minutes to land the first blow as Uche Ihuarulam benefitted from a Jumbo Wisdom’s cross to head home from a close range beyond the reach of Danlami Umar in goal for United.

Evans Ogenyi’s charges continued to pile the pressure on the visitors as they looked to pull away with the match at its infancy.

Efe Yarhere’s long-range shot was well dealt with by Umar just minutes after the opener.

Nasarawa United’s first clear chance came through Ikenna Ofor in the 26th minute after he forced the host goalkeeper, Richard Ocheayi, into action from close range, but his shot came with little power.

Shortly after, Silas Nwankwo used his energy brilliantly as he ran past his marker, but his left footed effort could only neutralize the goalkeeper, as the ball swept past the goal mouth.

Both sides looked to absorb the pressure as best as they could and ushered in the half time break with the hosts leading 1-0.

It was game on in the 63rd minute as the visitors gave themselves a lifeline with Nwankwo chesting down Haggai Katoh’s killer pass in the box before lashing a right footed low shot to undo Richard Ocheayi’s heroic saves as he penned his name on the scoresheet.

Moments later, the Coach Bala Nikyu-led wards increased their tally in spectacular fashion as substitute, Chinedu Ohanachom, turned in a Tebo Franklin’s miskick with great improvisation with 12 minutes to the end of the game.

The Solid Miners held on to see a much needed victory, their first ever win against the Seasiders at their home ground in all competitions, and returned them to the top of the NPFL summit with 14 points as they stretched their unbeaten run this season to six matches, with Nwankwo voted Man-of-the-Match, for a second time this season.

The Solid Miners will be hosted by border neighbours, Plateau United Fc, in a week’s time in Jos, in what has been dubbed as local derby.

BALA NIKYU(NASARAWA UTD): “We have our traditional way of playing, which is keeping the ball on the ground. But my wards seemed not to get the grip of the game in the first half.

“So, I gave them the go-ahead to play our traditional game, even if it means losing the game, and our plans worked for us.

“Our main ambition is to win anything God can afford us this season, be it the league or federation cup.”

EVANS OGENYI(WOLVES): “Football is an unpredictable game. It’s unfortunate that it ended this way.

“I never prayed for this. You saw the anxiety in my boys.
“It’s a bad development for my side because we didn’t take our chances. But I have taken the positives from this defeat and we will work on the attitude of our players.”

SILAS NWANKWO(MVP WINNER, NASARAWA UTD): “I feel very great. This is the second time I will be scooping this award, and I must thank my teammates for always being there for one another – It’s our collective award.”

BARR. ISAAC DANLADI(CHAIRMAN, NASARAWA UNITED):
“We are still focused. We have been able to blend youth and experience together and this is working for us.”