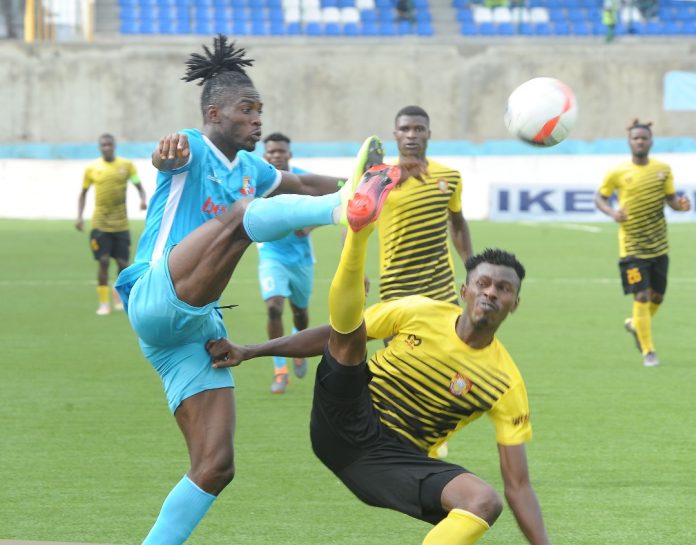 At the Muhammadu Dikko Stadium, Katsina, Katsina United put an end to the unbeaten start of new Akwa United coach, Ayodeji Ayeni after they pipped the Promise Keepers 1-0. Destiny Ashadi’s first goal for the Changi Boys on his return to the club after sojourn with Rivers United and Niger Tornadoes in the 56th minute proved to be the matchwinner.

The precious three points lifted Usman Abd’Allah side to the 14th spot with 30 points despite having a game at hand but Akwa United are in the 6th spot with 39 points.

At the Kwara Sports Complex, Ilorin, Kwara United needed two second half goals before beating hard fighting Rivers United 2-1 in a tough encounter. The league leaders stunned the Ilorin fans with the curtain raiser just after three minutes into the tie through Nelson Esor.

The Harmony Boys leveled the scores in the 57th minute through Samad Kadiri before Jide Fatokun bagged the winning goal 15 minutes before the regulation time. It Ias only the third time the Pride of Rivers would be beaten this season after the defeats to Plateau United and Sunshine Stars. They have lost consecutive away games for the first time this season also.

Stanley Eguma men kept their four points cushion at the top with 55 points after second placed Plateau United surprisingly lost 1-0 to Dakkada FC in Uyo on Saturday. The Peace Boys are still on 51 points.

MFM were held to a goalless draw at home by Enugu Rangers to remain rooted to the bottom of the table with 24 points but they have a game at hand against Abia Warriors in Okigwe on Wednesday. They are without a win in their last three games.

The much publicized South West derby between Sunshine Stars and Shooting Stars ended goalless while Remo Stars pipped Wikki Tourists 1-0. Lekan Adebayo with the only goal of the game which protects the Sky Blue Stars’ third spot with 43 points.

Ifeanyi Ogba scored his sixth goal of the season for the Pride of Benue’s opener in the 50th minute. Godfrey Utim bagged the insurance second goal in the 82nd minute before the Solid Miners reduced the deficit in the 90th minute from the penalty spot through Tochukwu Michael. It was Tochukwu’s third straight goal in the last three games with the last two coming from the penalty spot. The midfielder has scored seven goals in the current season.

In the concluding game, Heartland secured only their second topflight win over Abia Warriors after a 2-1 win at the Dan Anyiam Stadium, Owerri in another Oriental derby.

Last season both teams battled to a 2-2 draw at the same turf with the Scientific Boys having to come back from two goals down to settle for shared spoils.

Murphy Ndukwu got the first goal in the 23rd minute for his second goal of the season for Heartland in a game the home team dominated the early exchanges. Nonso Nzediegwu doubled the lead three minutes later through a deft finish but Godwin Obaje halved the deficit for the visitors in the 34th minute to make it a nervous finish. Heartland managed to repel Abia Warriors who had decent chances to level the result in the second half.

The victory ensured that Heartland supplanted Abia Warriors on the table. They are now 17th with 28 points while the Warriors are 18th with 27 points but they have an opportunity to leave that spot with an outstanding game against MFM on Wednesday.