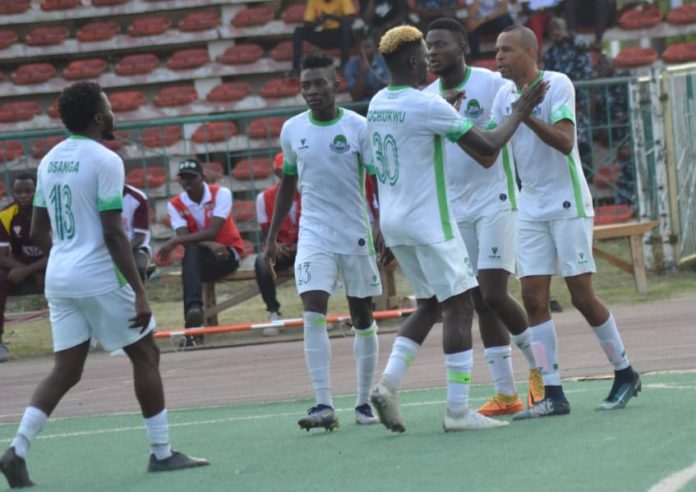 Rivers United continued to dictate the pace of the league table after a routine 5-0 home win over MFM saw them open a seven point gap at the top after Nigeria Professional Football League Matchday 27 games were decided on Sunday across the remaining eight centres.

The Pride of Rivers quickly went down to business and were a goal up after only 17 minutes through Nelson Esor. Despite the downpour the home team were in cruise control. Chijioke Akuneto bagged a double against one of his former teams to race to 11 goals this campaign before two quickfire goals through George Akpabio and Ishaq Rafiu Kayode in the final six minutes of the game. Kayode securing his 14th goal of the season.

The maximum points lifted Rivers United to 58 points on the log and seven ahead of Plateau United who were beaten 2-1 by Nasarawa United in the latest North Central derby played at the Abubakar Tafawa Balewa Stadium, Bauchi.

Sunday Okereke had shot the Solid Miners ahead after only four minutes but Plateau United ensured honours were even before halftime as Chimezie Izuchukwu fired home the equaliser in the 43re minute. Bala Nikyu men raced back into ascendancy through Chinedu Ohanachom’s effort in the 55th minute. The win has lifted Nasarawa United to the 12th spot with 35 points but Plateau United remain in second spot with 51 points. They have now lost two consecutive league games for the first time this season.

In Makurdi, Lobi Stars left it late before beating Katsina United 2-1 at the Aper Aku Stadium. Mustapha Salisu shot the visitors ahead just before the half time break but the Pride of Benue scored twice in the second half to turn the tide. Endurance Ebedebiri with the equalising goal in the 58th minute before Nanen Imenger grabbed the matchwinner two minutes before regulation time to ensure Mohammed Babaganaru’s men have won their last three home games since they drew goalless before their fans against Kano Pillars on April 10th in a Matchday 22 fixture.

At the Godswill Akpabio Stadium, Uyo, Victor Mbaoma’s late strike aborted another away loss for Enyimba against Akwa United. It is the second time new coach, Ayodeji Ayeni will fail to pick maximum points at home since he became the Promise Keepers coach at the start of the second stanza. It was as if it would go the way of last season when a solitary strike decided the tie when Babatunde Bello netted again for the home side in the 40th minute but Mbaoma made up for his profligacy with the leveller in the 91st minute. His late strike which was his 12th goal of the season is a reminisce of this tie in Aba last season when Akwa United scored at the death to rescue a point.

Akwa United are fifth on the log in spite of the home draw with 40 points but Enyimba are two places behind in seventh spot with 39 points. The draw was the People’s Elephant’s first away draw in the second stanza after three consecutive away losses.

Gombe United were truly at home at the Pantami Stadium after they pinned Sunshine Stars by a lone goal to leap to the eighth spot with 38 points. Alege Abdulqadir’s 16th minute effort was enough to hand the Desert Scorpions all points before their fans. The Owena Whales have slipped to the 10th spot with 37 points as a result of the defeat.

At the Lekan Salami Stadium Adamasingba, Shooting Stars pipped Niger Tornadoes 1-0 to extend their unbeaten run to three games. Former Rivers United attacker, Moses Omoduemuke with the only goal of the game in the seventh minute. The three points ensured the Oluyole Warriors are in the 11th spot with 37 points but Tornadoes are three places below with 33 points.

Kano Pillars were forced to dig deep before securing a priceless 2-1 home win over Kwara United at the MKO Abiola Stadium, Abuja. Samad Kadiri drew the first blood for the Harmony Boys in the 35th minute but two quick goals through Jerry Eze and Auwali Ali in the 52nd and 58th minutes guided Sai Masu Gida to Victory and thus eased the pressure on Salisu Yusuf led Pillars technical crew.

The win ensured Pillars leapfrog Heartland at the 18th spot with 29 points and with a game at hand. The Owerri side are now 19th with 28 points. Kwara United however slipped out of the top five as a result of the defeat. They are now sixth with 40 points.

Wikki Tourists made it first win after three games after a 2-0 home win over troubled Dakkada FC. Ridwan Adesina and Fuad Ekelojuoti goals in the eighth and 70th minutes got the Giant Elephants back to winning ways at the Ahmadu Bello Stadium, Kaduna after they drew goalless to Heartland in their last home game. They followed that up with 1-0 defeat to Remo Stars in Ikenne in the last game before their latest win.

Two games were played on Saturday in Okigwe and Awka respectively. At the Awka City Stadium, Enugu Rangers heaped more misery on Oriental brothers, Heartland FC whom they bashed 3-1. The Owerri side took a surprise lead through the goal of Monday Yakubu in the 13th minute after the striker capitalised on a defensive gaffe from Philip Clement.

The Flying Antelopes were on level terms nine minutes after the visitors’ opener through Ossy Martins who reacted fastest to the rebound from Chidiebere Nwobodo’s close range effort which was initially saved by Goalie Femi Thomas. Shedrack Asiegbu put the home theam in the ascendancy in the 40th minute before Eso Achibong’s 90th minute strike sealed the points.

At the Okigwe Township Stadium, Abia Warriors made it two successive home wins after Yakub Hammed and Valentine Odoh’s goals steered them to a 2-0 victory over Remo Stars.