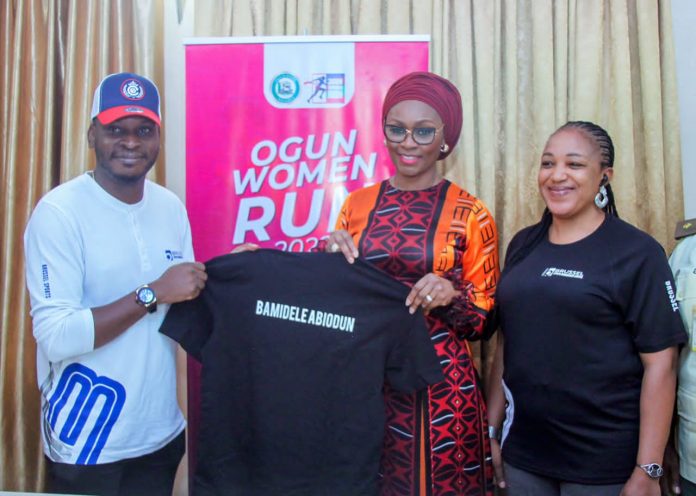 Arrangements are in top gear for the maiden edition of a 5 kilometre all women affair event in Ogun State, tagged “Ogun Women Run”, put together by Brussels Sports Management Limited.

At the World Press Conference held this Tuesday at the conference room, MKO Abiola Stadium, Abeokuta, the Chief Executive Officer of the company Mr. Seyi Johnson expressed gratitude to his mentor, Hon. Bukola Olopade, a former Commissioner in the Gateway state, for putting him through the journey of organizing a road race.

“After over 21 years under my boss, Hon. Bukola Olopade, I’m happy that he has given me his blessings to start this my new journey in sports management, together we have done the Access Bank Lagos City Marathon, the Abeokuta 10km race, the Remo Ultra Race and a host of other events, so he has taught me a lot, I’m still learning and I will forever be grateful”

Mr Seyi Johnson explained that Ogun Women Run is borne out of the need to encourage, project and give priority to the female gender.

“We decided to do this because of the need to promote healthy living among women, there’s a women race in Lagos, so it’s just perfect that Ogun Women are having there own version”

“It’s our flagship race and the support we have received has shown that we will even get bigger and better in all spheres”.

Going by the itinerary of the race, One thousand, five hundred (1500) runners are expected to take part, while the total prize money for the event is put at One Million Naira.

The event will take place on June 4, 2022 starting from First Bank, Sapon, it will terminate at the Moshood Abiola Stadium, Kuto, Abeokuta.

Organizers also confirmed that five percent of whatever realized from sponsorship will go to the motherless babies home as a form of Community Social Responsibility, (CSR.)

Mr. Seyi Johnson also gave kudos to the state Governor, Prince Dapo Abiodun for creating an enabling environment for an event of such magnitude to thrive.

The Brussels Sports CEO did not leave out the energetic and supportive wife of the governor, Mrs. Bamidele Abiodun for the motherly role she has played.

Present at the Press conference were the Hon. Commissioner for youth and sports, Dr. Kehinde Oluwadare, represented by the Permanent secretary in the ministry, Engr. Abiodun Olayiwola, his Women Affairs counterpart, Mrs. Funmilayo Efuwape, Director of Sports Ogun State, Mrs Iyabo Rotimi, technical representative from the Athletics body, representative of Access Bank, gentlemen of the press and people from different walks of life.