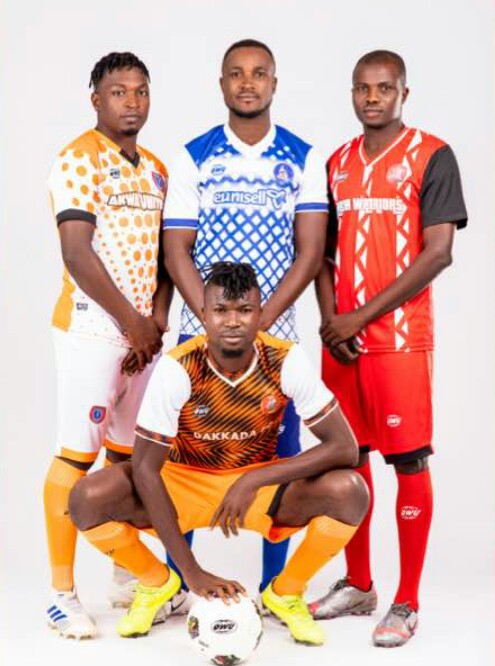 Nigeria Professional Football League season for 2021 will reach halfway stage this weekend across nine centres except for Enyimba whose tie with Enugu Rangers at the Nnamdi Azikiwe Stadium, Enugu has been put on hold because of their CAF Confederation Cup Group A tie at home to Entente Setif of Algeria this weekend.

The first game of the weekend comes up today at the Agege Stadium, Lagos between banished Sunshine Stars and Akwa United by 4 pm. The Owena Whales are winless in their past 10 games and were narrowly edged by a lone goal in Port Harcourt against Rivers United last weekend. Sunshine Stars won this same tie 1-0 in Akure last season and another identical score in Lagos this evening will mean their first win in 11 games and relief for underfire Gbenga Ogunbote.

Other remaining matches are fixed for Sunday. At the Agege Stadium, Lagos again, relegation-haunted Moutain of Fire Miracles Ministries (MFM) will face another troubled team, FC IfeanyiUbah in the battle of the basement sides. The Anambra Warriors needed a stoppage-time goal to end their winless streak against the Olukoya Boys last season. FC IfeanyiUbah are 19th on the spot with 15 points while MFM are 15th with five points better. Both teams were beaten at Jigawa Golden Stars and Warri Wolves respectively in their last games. An exciting game beckons on Sunday.

Kabiru Dogo’s led Lobi Stars were run ragged in Uyo last weekend where they were thrashed 3-0 by Akwa United. They host Jigawa Golden Stars this weekend still aware of that abysmal first-half collapse at the Godswill Akpabio Stadium and their insipid defeat to Jigawa Golden Stars last season, the last time both teams met. The Pride of Benue are currently at mid-table and eight points adrift of leaders, Kwara United. They will surely desire a win to begin their upward move to the top half of the table.

At the Godswill Akpabio Stadium, Uyo Dakkada FC will entertain Rivers United in their second topflight meeting in their history. The Chosen Ones hold the ace with a 2-1 nervy win the last time they met also in Uyo last season. It was their only encounter before the outbreak of the Coronavirus pandemic which forced the league season to be abruptly ended after 25 Matchdays last year. Rivers United enjoyed a listless 1-0 victory over Sunshine Stars as a response to their 4-1 drubbing in Makurdi by Lobi Stars the penultimate weekend while Dakkada were pinned by a lone goal defeat in Aba against Enyimba on Monday.

The Kwara State Sports Complex, Ilorin will be agog on Sunday when fourth-placed Nasarawa United visit leaders, Kwara United. The Harmony Boys have won their last two consecutive games against Adamawa United (5-0) and Katsina United (2-1). Can they make it a hat-trick of wins against the Solid Miners? Nasarawa United will go into the game with revenge on their minds having lost 1-0 to the same team in Lafia last season. They warmed up for their Ilorin visit with a 5-3 whiplash of Abia Warriors in Lafia last weekend.

At the Okigwe Township Stadium, Okigwe, Imo State, Imama Amapakabo must rally up his Abia Warriors players to put their nightmarish loss in Lafia to Nasarawa United behind them as they welcome Plateau United to their fortress. Before the eight goals thriller in Lafia, Imama had complained about his team’s lack of clean sheets but the five goals they conceded in Lafia won’t make him happy either. His strike force possesses the best attack in the league with 25 goals but they have shipped in 23 goals. They are the fourth-worst defence in the league.

11th placed Abia Warriors (24 points) will host erratic Plateau United who are presently ninth on the log with 22 points. Abdu Maikaba led Peace Boys have been disappointing this term with only seven wins from 18 matches. They managed to hold off Enugu Rangers 2-1 last weekend in Jos can they remain consistent with a positive outcome in Okigwe this weekend? The 3-0 loss Plateau United suffered to the same Abia Warriors in Umuahia last season is still very fresh in their memories.

At the Abubakar Tafawa Balewa Stadium, Bauchi, Wikki Tourists will be seeking their first victory in three games when they welcome troubled Katsina United. They were beaten 2-1 at home by Kano Pillars in the penultimate fixture but they managed a face-saving goalless draw in Gombe versus Adamawa United.

Katsina United otherwise termed the Changi Boys, were beaten 2-1 in Katsina by Kwara United, and with only five victories from 18 fixtures they are presently 18th on the log with 18 points. Despite their underperformance in the league, Baldwin Bazuaye tutored side will look into the last fixture in Bauchi with renewed hope. They picked a 1-1 draw last season at the same venue and a repeat performance could mark their mini-revival in an abysmal season thus far.

At the Dan Anyiam Stadium, Owerri, Heartland FC will host bottom-placed Adamawa United in a repeat of last season’s fixture played at the Okigwe Township Stadium which ended in a 5-0 win. The Naze Millionaires’ build-up to the game has been hindered by strike action of players over unpaid salaries and match bonuses. It was in a similar way they prepared for their last game against Kano Pillars which they lost through a debatable last gasp spot-kick in Kaduna.

Despite possessing an array of players who can return the club to its glorious days, administrative ineptitude is threatening to shatter Heartland’s season.

Kano Pillars will have honour of playing a second consecutive home game after their controversial victory over Heartland FC last week. Sai Masu Gida will host Warri Wolves whom they will be seeking a first win over since 2014. Pillars have met the Seasiders six times after their 2-0 home victory of April 2nd, 2014 in Kano but they have only managed three draws and three losses including last season’s 1-1 draw in Kano.

Kano Pillars are in the second spot on the table with 33 points from 18 matches while Warri Wolves are 16th with 19 points and Sai Masu Gida will be more than eager to secure a first win over their bogey team in their seventh attempt.

CAFCC: Rivers United to undergo Covid-19 test Tuesday ahead of ...