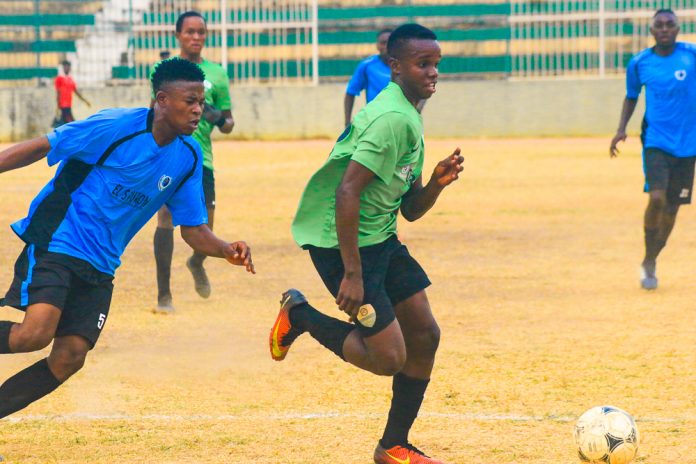 St. Monica FA clean sheet at the back finally got stained but got the cushion as they won their third match in a bounce, beating Adalchi FA, 4-2.

Defending champions, Mees Palace FA maintain their winning streak, bashing SJC Lions 4-1, with Kelvin Adeyemo scoring a brace for the Blue Panthers,getting the first as early as in the 2nd minute of the match.

Another team yet to drop a point is Rahbam FA who strolled over Jazzy Stars FA, tearing them apart 3-1.
Salihu Ahmed, Khalid Mainasara and Usama Umar got the goals for Rahbam FA, while Udakudi Ajang got the consolatory goal for the Galaxies in the 9th minute.

Here are other results of matches played yesterday in the Under-16 category of the ongoing Tsemba Wummen League:

Jeremiah Sunday got a haul in the 6th,20th,27th and 30th minutes, while Jeremiah Joshua got a brace to complete the rout in the 31st and 32nd minutes. Prince Philip and Daniel Saidu also got on the scorers sheet in the 19th and 25th minutes.

Here are the remaining results of matches played in the Under-14 category: