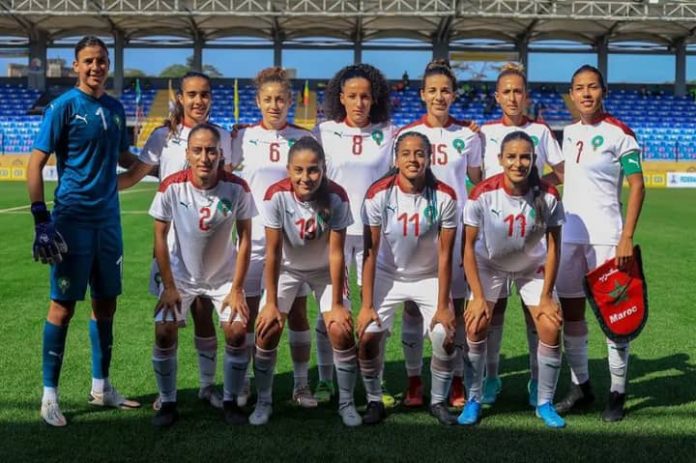 Atlas Lionesses of Morocco prevailed 1-0 over the Indomitable Lionesses of Cameroon in an action packed opening game of the Aisha Buhari Invitational Tournament on Thursday at the Mobolaji Johnson Stadium, Onikan, Lagos.

The first chance of the game fell to Rose Bella in the 15th when her shot from outside the box hit the cross bar but the Moroccans were fortunate.

In the 34th minute, Cameroon captain Gabrielle Onguene moved past the Moroccan defence but goalkeeper, Errmichi Khadija was fast to catch the ball before the former could unleash a shot.

Rose Bella in the 41st minute had a one-on-one chance with Errmichi Khadija who was fast enough to prevent the opening goal from the Malabo King player.

Chebbak Ghizlane’s free kick for Morrocco a minute before half time was easily saved by the Cameroonian goalkeeper.

Ornela Touta’s cross in the 54th minute was punched out for a throw in by Errmichi Khadija.

Morocco tried their luck when Badri Najat’s long range strike went over the bar in the 75th minute.

Tagnaout Fatima finally scored the opening goal of the game in the 78th minute when she raced through the Cameroonian defence to slot the ball out of the goalkeeper’s reach.

Morocco will face Mali in its final game on September 19 while Cameroon square up with Ghana on September 20.