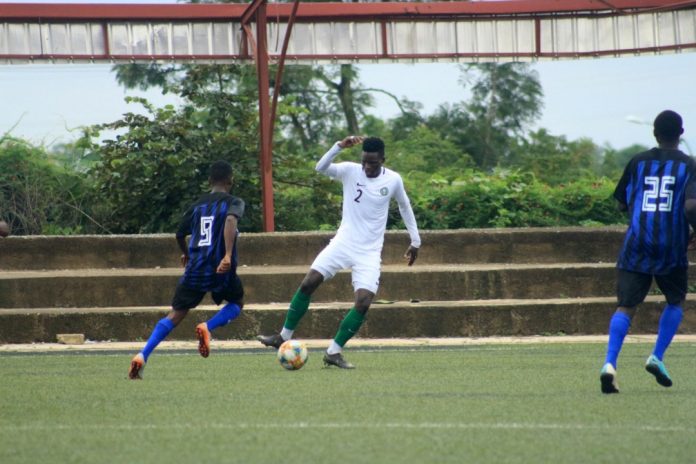 Flying Eagles have secured another important win in their quest to put up an appreciative show at the African Games where they are standing in for the Under 23 team in Morocco as from next week.

They barely managed a 2-1 win over Godosky FC of Nnewi, unlike the previous two games where they blew their opponents: Next Naija Soccer Stars and Gwarimpa Stars away in a nine-goal blitz.

The Eagles started impressively and scored the curtain-raiser in the 10th minute through Saeed Jubrin and it was how the first half ended with the Nigerian team taking a 1-0 lead to the brief recess.

Godosky FC lifted up their game and grabbed the equaliser to the chagrin of the Flying Eagles but the African Games bound side regained their lead in the 77th minute through Jubrin again who benefitted from good footwork from the king of assist, Success Makanjuola.

Impressive Jubrin who was the unarguably Man of the Match was however hurled off before the end of the game after he suffered a knock as the Flying Eagles finished the game with a man short.

Flying Eagles are preparing for the African Games where they are going to represent Nigeria in the football event in Group A alongside Morocco, Burkina Faso and South Africa.