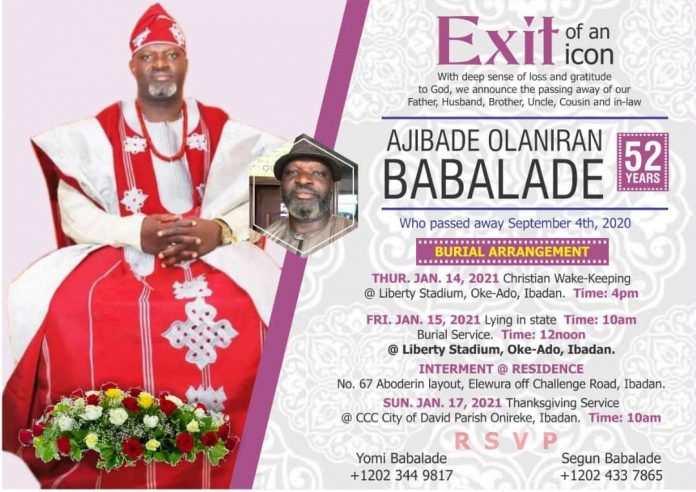 The Nigeria Football Federation has paid glowing tributes to former Super Eagles’ defender, Ajibade Babalade, who died on 4th September 2020 and would be buried in Ibadan, the Oyo State capital on Friday, 15th January 2021.

The hard-as-nails defender, a member of the Super Eagles squad that won bronze medal at the 1992 Africa Cup of Nations finals in Senegal, suffered a heart attack and lost the battle at a private hospital on 4th September 2020. The Christian wake keep held at the Liberty Stadium, Ibadan on Thursday evening – venue of Babalade’s many battles on the pitch as a player.

General Secretary of the NFF, Dr Mohammed Sanusi, said Nigerian Football will never forget the “energetic and highly dedicated player who defended the colours of Nigeria with so much passion, fervour and elan.”

He added: “Ajibade Babalade was a rugged and no-nonsense defender who was happy to wear the colours of Nigeria at any time. Whenever he was there on the field of play, there was never a doubt as to his total commitment. He was like a soldier on the war front like no other. Nigerian Football will miss him greatly. We pray that God grants his soul eternal rest, and also grant those he has left behind, particularly his family members, the fortitude to bear the loss.”

‘Kunde’, as Babalade was fondly called, was a member of the Shooting Stars Sports Club of Ibadan squad that won the first edition of the CAF Cup competition, then known as MKO Abiola Cup, in 1992. He was also a member of the 3SC squad that won the Nigeria League and Cup double in 1995, before the same team reached the final of then African Champion Clubs’ Cup in 1996, losing on penalty shoot-out to Zamalek FC of Egypt in Cairo.

Babalade was again in the 3SC team that won the WAFU Clubs’ Cup in 1998.

The body of the late defender will lie in state at the Liberty Stadium as from 10am on Friday, before interment at his residence in Aboderin lay-out, Elewura, off Challenge Road, Ibadan.