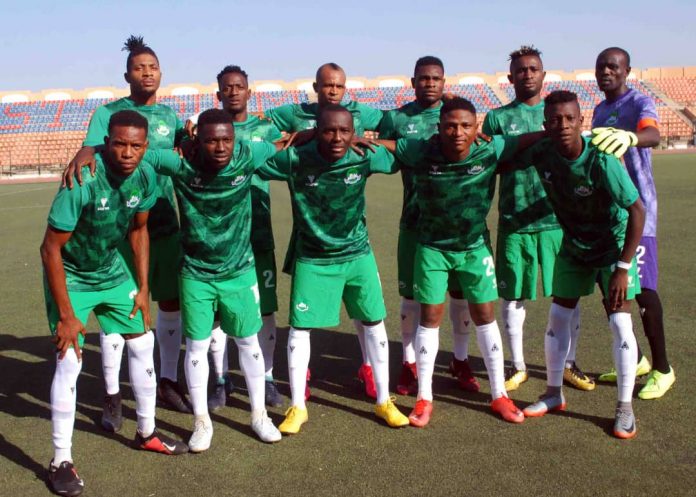 Nasarawa United’s dream start to the season continues as they played out a goalless draw against Adamawa United, as the 2020/21 NPFL Season entered Matchday four.

Nasarawa United took the game to the hosts in the early moments of the game as the team was awarded with a 21st minute penalty after Jibrin Abubakar apprehended Chinedu Ohanachom who was clear on goal.

Reuben Nicodemus stood to take the resultant penalty but Victor Philemon in goal denied the Solid Miners with a pointblank safe as he parried the ball for a corner.

From then on, it was a one-sided affair as Nasarawa United dominated but were unable to take advantage of their chances in the first 45 minutes.

Adamawa United came all out in the second half as Danlami Umar denied the hosts a couple of times with some eye-catching saves before Adamu Hassan came close, but his effort couldn’t find the back of the net.

Ikenna Ofor became the culprit when he could not head past Victor Philemon after some fancy footwork from Reuben Nicodemus.

In an attempt to get a win, Bala Nkiyu brought in Osanga, David and Silas in an all-attacking substitution as the story became the same.

Ehiaghe David should have stolen the show at the dying moments but his weak header fell into the waiting hands of Victor Philemon, who was voted Man-of-the-Match, as Adamawa United continued to search for their first home win of the season, while the Solid Miners maintained their unbeaten run into the league season.

Not happy with the outcome of the game, Coach Bala Nikyu said, “That’s the game of football, even though it was not what I bargained for.

“If we had played half of what we played against Pillars, we would have won.

“The draw, to me, is disappointing.”

His opponent at the dugout, Ibrahim Bello Shehu, said he was happy that the game ended peacefully.

“We thank God that there were no serious injuries. Everybody is fine.”

“We won’t bring our arms down. We need to still keep working hard, that is the key.

“We are not disappointed, but we are equally not satisfied.

Katsina United are the next opponents of Nasarawa United at the Lafia City Stadium, come Sunday, 17th January, 2021.