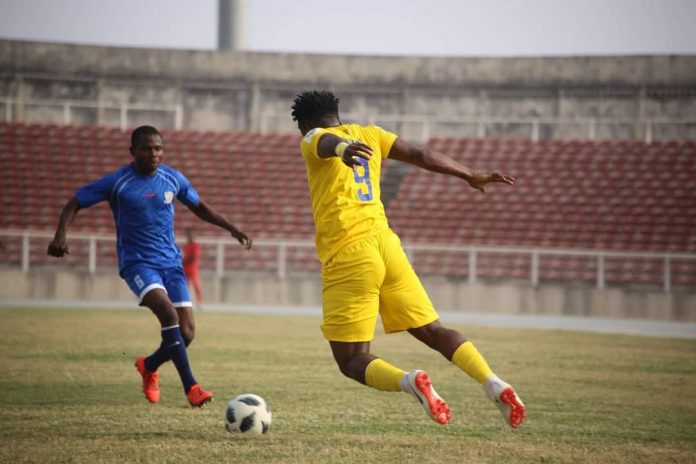 A plucky Sunshine Stars side slipped to a narrow 1-0 loss in Sunday’s NPFL 2020/21 opening round meeting with Jigawa Golden Stars at the Ahmadu Bello Stadium, Kaduna.

It was Gbenga Ogunbote’s first game in charge of Sunshine Stars since returning to manage the club in September and of course, the first taste of league football for both clubs, following a nine-month hiatus occasioned by the COVID-19 pandemic.

The game gathered momentum slowly and it was Sunshine Stars goalkeeper, Ariyo David that was called into the first save of the encounter, repelling a goal-bound effort from point blank after seven minutes of play.

Sunshine Stars had an attempt of their own five minutes later with Waheed Adebayo forcing Godwin Paul into saving his fierce low drive before Fu’ad Ekelojuoti was flagged offside on the rebound.

Chances were few and far between until the 42nd minute when Ariyo parried into safety off the frame from a well-taken free kick at the edge of the area.

Quazeem Obanigba almost broke the deadlock for the visitors but missed the target by inches from a distance range at the stroke of half time.

The second half started with more caution from both ends as Sunshine Stars rang the first change, handling Chinedu Udechukwu his debut in place of exciting youngster, Ayo Adejubu.

In the 54th minute, mercurial left back, Seun Olulayo was in the right place at the right time to make a goal mouth clearance to deny the hosts of a lead.

Six minutes later, Ekelojuoti went down under a challenge in the opponents vital area but Sunshine Stars’ penalty appeal didn’t move the referee.

The deadlock was however broken 13 minutes from time through the aptly named striker, Onukwube Stone, who hit decisively from a well worked out chance in front of goal to hand Jigawa Golden Stars the lead.

With the clock ticking out, the hosts launched other attempts at doubling their advantage but David Ariyo stood firm to keep the scoreline tiny for a possible late come back.

Udechukwu had the chance to level matters for Sunshine Stars in added time of the contest but somehow failed to apply a desired first time volley when sent through in the area, ending the game in favour of  the hosts.

The Akure landlords will next regroup for the visit of FC Ifeanyiubah on match day two at the turn of the New Year.

Coach Ogunbote faced the press after the game and some of his words were transcribed below by Sunshine Stars FC Media.

“We need to just take the positive from the game and get ourselves prepare for the next game. In some areas we will make amends that will make the team better in the next game.

“I don’t complain about officiating, that’s my style, I don’t do it.”