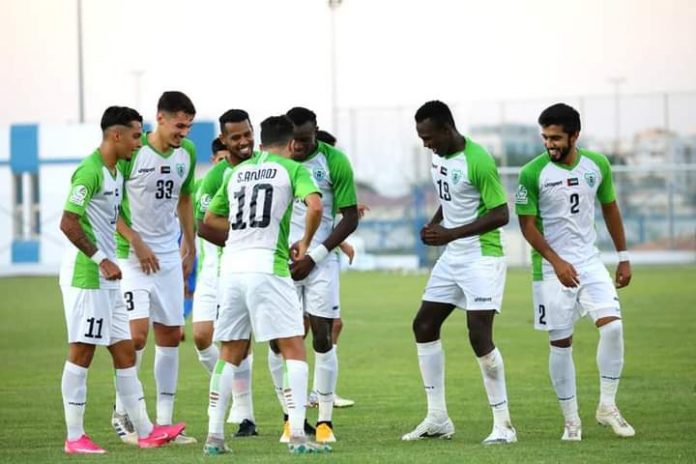 Despite losing the game 3-2, Ibrahim Mustapha popularly known as Yuga was in his best element for Dibba Al-Hisn as he scored his first goal for the club since signing last month.

Prior to the game, Mustapha had played two games with two assists but his precision was crucial for the goal.

Speaking after the game, Ibrahim revealed that he was relieved to have finally scored his first goal since teaming up with his new team.

“I feel fulfilled to have scored my first goal today although the result didn’t go our way but we will continue to work hard so as to qualify to the UAE Premier league, he said,” Ibrahim said in an interview.

On if he was under any pressure to score goals for Dibba, Mustapha said he was never pressured to score and his team are very supportive.

Al Bataeh raced into a two-goal lead with Adel Saqer Abdulla and Haitham Ali Matroushi scoring in the 12th and 22nd minutes but Ibrahim scored a spectacular goal in the 40th minute to reduce the goals deficit before Mohammed Al Marbuii leveled the scores for the league leaders.

Haitham eventually broke the hearts of Mustapha’s team with the winning strike and his second of the game in the 53rd minute for Bataeh as all efforts from Ibrahim Mustapha and his team proved abortive. They still however maintained their number one spot on the twelve team log with nine points from four games.

Dibba Al Hisn will host city neighbours, Dibba in a local derby on December 11 in their next league tie.