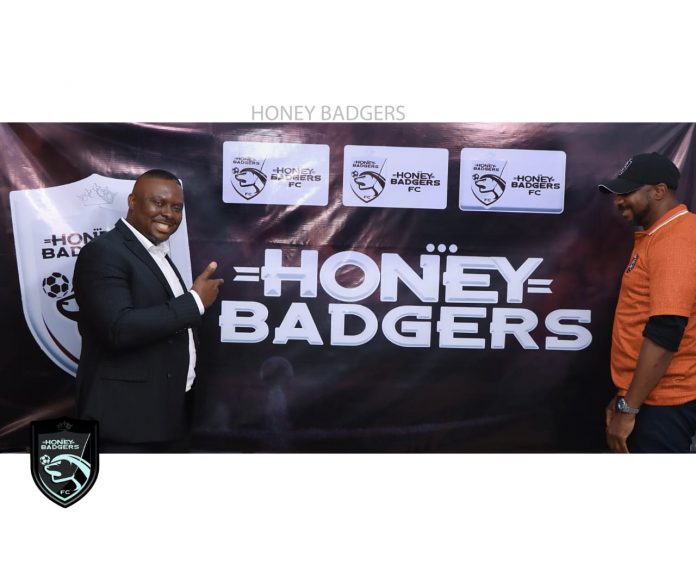 At a well attended press conference in the Federal Capital of Nigeria, Abuja, the former Super Eagles goal poacher was introduced to the press as Supremo of the Club by outgoing Chairman, Barrister Paul Edeh, who described Sule as a Sports administrator with a wealth of experience.

The former AC Horsens of Denmark forward played professional football in Nigeria, Qatar, Denmark and Malaysia before quiting the round leather game in 2008 for business and Sports administration.

Sule spent four years working as Chairman at Kogi United and Confluence Queens, playing a key role in the development of the two teams and enjoyed a successful spell, leading both teams to the NWFL Premiership Super 4 in Lagos and the NNL Super 8 in Aba respectively.

An excited Abdul Sule, told newsmen on tuesday that he loves challenges, reason why he accepted to start a new role at Honey Badgers FC.

“This is a wonderful opportunity for me, because Honey Badgers have shown great progress since it was formed in 2019, promoting from the Nationwide to the Championship and I am convinced that the future will be better.

“I admire the way Barrister Paul Edeh is going with the team and no wonder they club keep improving year by year. We will continue to be ambitious and keep the legacy and policy of the team.

“We have big plans for the team and I think the players we have now are good enough to get us a promotion ticket to the Premiership, but above that, we want to build an environment where players from Benue and the northern part of the country can fulfill their dreams of playing abroad, and no doubt, we shall be giving them various opportunities to achieve that.

“We will try as much as possible to make the team better as we have started planning before now. We would be inviting some foreign coaches to come see the team at the Flying Officers Cup and that could be a step in a right direction.

He went on to further say: “Barrister Paul Edeh’s willingness to see me join Honey Badgers was decisive and for me, the choice was natural, because I see great potential in the team and together we shall achieve greatness.” He Concluded.

Also speaking at the Press Conference, Barrister Paul Edeh noted that the choice of Abdul Sule as Chairman of Honey Badgers FC was borne out of the fact that they both share the same vision to develop the game of football from the grasroot.

The Legal Luminary stated that he resigned as Chairman of the Makurdi based club and handed over to Sule, to put more concentration at Sports Development, through the Ratels Sports Development Foundation, an initiative which is getting bigger by the day.

“We believe that Abdul Sule will bring in his wide range of experience to play at the Badgers, secondly we noticed how he took Confluence Queens from their lowest moment to the peak before leaving.

“Working with him has shown that we share the same vision and passion for women’s football. We don’t believe in finished product, we build from the scratch and I think he is the right man for the job.

“Further more, his know-how in Football administration is topnotch, having played football to the highest level, both home and abroad are some of the main reasons leading us to present him our ambitious challenge.

“This appointment, is another sign of our ambition and desire to be as competitive as possible in the league, because truly, we have a lot of talents in Benue and the northern part of the country and we believe we can harness and nurture them to greatness through his appointment as Chairman. We want to congratulate him and wish him well in this new quest.

Honey Badgers is an NWFL Championship side, based in Makurdi, Benue State and was founded in 2019 alongside Naija Ratels by Barrister Paul Edeh, last year, they finished second in the NWFL Nationwide to gain automatic promotion to the Championship.