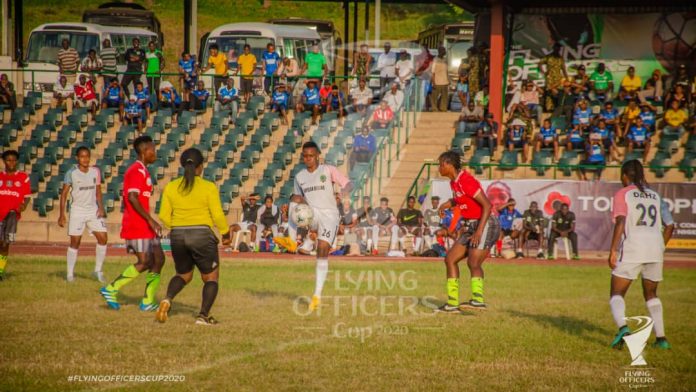 Bayelsa Queens Captain Joy Jerry has said she and her teammates are determined to beat Nasarawa Amazons in the final of the 2020 Flying Officers Cup on Sunday in Abuja so as to dedicate it to their passionate fans.

The ‘Restoration Girls’ had a very tough battle in the semi-finals against Edo Queens, but managed a 1-0 win through an own goal scored by young defender Jumoke Alani in the 71st minute.

Jerry who is considered as the youngest captain in the NWFL Premiership insisted that the Flying Officers Cup final gives them an opportunity to land a silverware.

“People see this competition as a pre-season, but as long as there is a trophy to be won, we want to win it,” Jerry told the Flying Officers Cup Media.

“This is an opportunity for us to prove we can be Champions and we know if we win, it’s definitely going to be in the record book.

“We have a very strong team and winning this will make our fans back in Yenagoa happy.

“Bayelsa Queens is a club with a lot of history and we want to keep creating good histories,” She added.