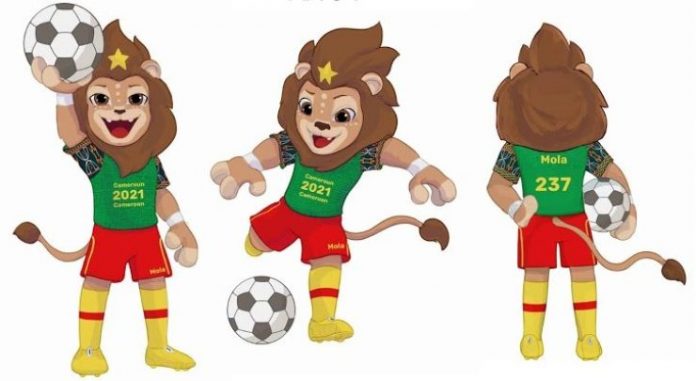 The official mascot and theme song of the 2021 Africa Cup of Nations to take place in Cameroon next year have been unveiled and selected.

This was during an official ceremony to that effect held at the Yaounde Multipurpose Sports Complex on Saturday, May 15, 2021.

The mascot of the upcoming tournament nicknamed “Mola”, signifying a friend, brother or uncle depending on the geographical location – the appellation is used in Cameroon – was voted from a final list of three, with the project AA 54 differentiating itself as the overall winner of the art competition.

The Fonkua Felix-designed mascot gathered 22 points of 40, finishing as overall winner and beating projects created by Dissake Bryan and Mbong Valery. The two came 2nd and 3rd, garnering 21.67 and 17.9 points respectively from votes of the selecting jury and fans.

The selection process for the mascot had a general list of 35 entries with the list earlier shortened to 10, thereafter, it was reduced to 6 before the final three available during the ceremony.

The official theme song of the African football bonanza was equally selected.

The three final theme songs were selected from 100 entries competing for the prestigious recognition.

Both the official mascot and theme song of the competition are pending validation from the Confederations of African Football, CAF.

The 2021 AFCON tournament will take place in Cameroon next year from January 9 to February 6.