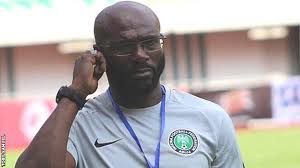 The Management of Abia Warriors Football Club of Umuahia has given the Technical Crew led by former Super Eagles Assistant Coach, Imama Amapakabo the mandate to win their next three games against FC IfeanyiUbah (away), MFM (home) and Lobi Stars (away) or be ready to face the music.

The ultimatum came after the Management held an emergency meeting with the coaches at the Club’s Secretariat in Umuahia yesterday following the dismal performance of the team in the ongoing Nigeria Professional Football League where Abia Warriors have lost their first four league games.

The Management reiterated that the team has no reason not to do well considering the calibre of players in the team pointing out that technical crew, led by Imama Amapakabo has enjoyed the greatest support and cooperation ever given to any crew in the Club’s history.

Abia Warriors begin the road to the three game ultimatum with an away tie to FC IfeanyiUbah on Sunday in another Oriental derby while they also have games against MFM in Aba and Lobi Stars in Makurdi on January 24th and 31st respectively before the management sits again to run the rule on Imama and the entire technical crew.

Abia Warriors are last on the league table after four matchdays without a point and they remain the only team with no point this season despite playing four games including two home games.