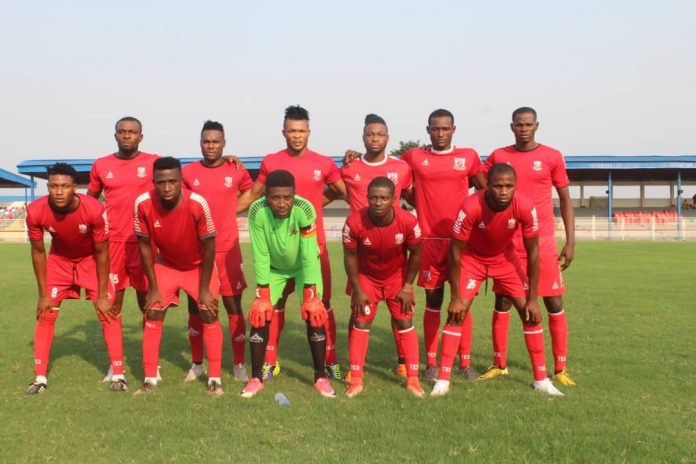 Hostilities in one of the two Oriental derbies in the NPFL Matchday Four of the Nigeria Professional Football League (NPFL) between Heartland fc and Enyimba fc at the Dan Anyiam Stadium Owerri started late due to the protest by the visitors who contested the eligibility of some of the players of their host.

After the verification of Heartland FC players’ licenses by the match commissioner, proceedings for the start of the match followed.

Samuel Nnoshiri took the kick off for the Naze Millionaires at about 4:43pm and two minutes later he had the first goal scoring opportunity of the match but his shot went inches off the post.

Some moments later, the People’s Elephant’s Samad Kadiri got the first corner kick of the match which was taken by Cyril Olisema, which was cleared out of danger by the Heartland defence.

Heartland Fc attacking quartets of Nnoshiri, Emmanuel, Onyedikachi and Oghali gave the visitors defence a good run for their money as they consistently launched various degrees of attack which finally paid off with Shedrack Oghali getting the first goal of the match with a powerful header in the 31st minutes of the match.

Austin Oladapo of Enyimba received the caution ( yellow card ) of the match for dissent and minutes later, the visitors had a penalty appeal but the referee signaled play on.

Onyedikachi could have made it two goals for Heartland fc but his shot was parried by Olufemi Kayode. The referee sounded his whistle for the end of the first half.

Enyimba Fc made the first substitution of the match with Djeri replacing injured Kayode in goal before the commencement of the second half which they took the kick off.

Both teams started off energetically with end to end attacking threats that saw Enyimba getting the first corner kick of the second half. The corner was poorly taken and easily cleared by the Heartland fc defence. Adachi Emmanuel of Heartland got the second goal for his team after beating his marker to slot home the ball in the 53rd minutes of the match much to the delight of the home team.

Coach Fatai Osho of Enyimba responded by introducing Tosin Omoyele for Victor Mbaoma while Iwuala replaced Kadiri. Omoyele missed a sitter in the 89th mins of the match as his header went off Chijioke Ejiogu’s guarded post.

Heartland Fc gaffer Fidelis Ilechukwu had the better laugh as his lads held off all the attacking threats made by their visitors. It was celebration galore as the referee ended the entertaining encounter between the Oriental brothers which saw Heartland fc getting their first win after four matches in the 2020/21 NPFL season.

Up next for Heartland Is a short trip to neighbours Rivers United in a Matchday Five on Sunday 17th January 2021.