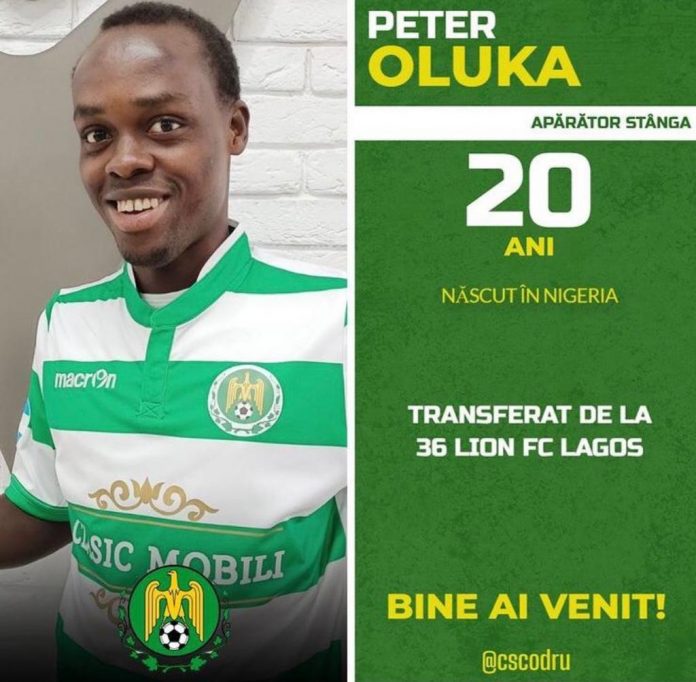 36 Lion has announced the capture of one of their finest midfielders, Peter Oluka by Moldovan topflight side, FC Codru Lozova.

Oluka who was scouted by 36 Lion’s eagle-eyed associates of Ezekiel Maji and Yema Olanrewaju in Abuja in a friendly game got his desired breakthrough when he turned heads at a tournament organised at Lead City University, Ibadan earlier this month where he was adjudged the best midfielder of the talent hunt tourney.

He was quickly exported to Moldova and he is on a rescue mission to rock bottom Codru who are last in the Divizia Nationala with six points from 25 games. He signed a two year deal on March 13th this year and terminates in May 2023.

“Discovered by Coach Ezekiel Maji and scouted in Abuja alongside Star Coach Yema; Peter Oluka is on a rescue mission in Moldova to lift Codru Football Club out of relegation waters and keep them afloat the Divizia Nationala.

“Peter, a.k.a. Wiser has been winning the midfield battle for 36 Lion Football Club since he graduated from our Abuja U-16 under the guidance of Coach Eazy.”

“Peter is not only a box to box fighter, he also holds the record for the most distance covered in games at the average of 11.6km per game.

Hajj Liameed further hailed the contributions of FIFA Agent who brokered the deal, Metehan Karaman and also revealed that it would be the club’s last deal in the ongoing season as they set their sights on 2021 2022 season as from July this year.

“Kudos to Mr. Metehan Karaman, our Eastern European FIFA Agent who brokered this deal. We close the 2020/2021 winter transfer window with this transfer and continue to move positively forward.”

Oluka is in pole position to make his debut on Sunday as Codru who were beaten 7-2 by FC Milsami Orhei in a league tie last week, host Speranta in another top-flight game. He has been assigned jersey number 20 at his new club.

Codru are striving to end five match losing streak and also secure the first win of the new year after their last victory in November last year.