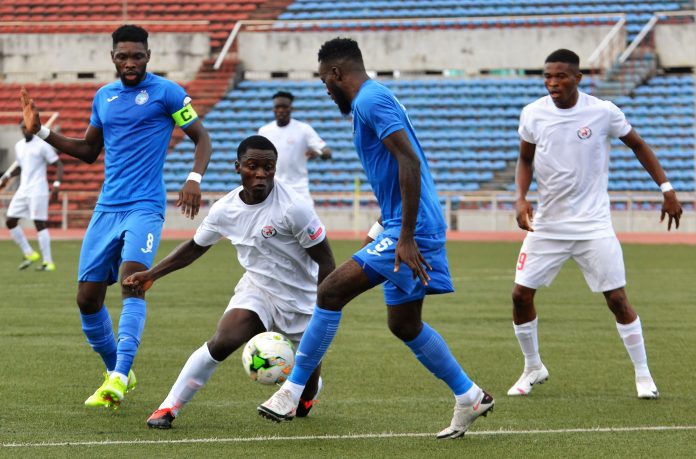 Kano Pillars have regained top-flight at least for the next 24 hours after a 1-1 draw in the Northwest derby against bitter rivals, Katsina United at the Muhammadu Dikko Stadium, Katsina Sunday evening www dasportstainment247.com reports.

The previous matches between the pair had been marred with crowd violence which necessitated a punitive action from the League Management Company (LMC) to ensure that it was a complete closed doors affair including specifying the numbers of players and officials allowed into the stadium for the encounter.

It yielded dividends as both parties headed home with a share of the spoils. Parading Super Eagles’ Ahmed Musa Kano Pillars pulled the trigger in the 26th minute through Rabiu Ali’s sublime freekick for his second consecutive goal but the Chanji Boys responded gamely with the equaliser six minutes later from Ahmed Rasheed who had earlier missed a spot-kick in the 20th minute.

Sai Masu Gida extended their unbeaten run to eight games and are atop the table with 41 points from 22 games. Akwa United can overtake them if they beat Enugu Rangers on Monday in a rescheduled tie. Katsina United with four points from their last three games are in the 16th spot with 22 points as the revival under new coach, Azeez Mohammed continues.

Jigawa Golden Stars needed a stoppage-time penalty kick converted by Richard Christopher to secure a point against determined Dakkada FC. Solomon Chigozie had shot the Chosen Ones ahead in the 33rd minute before the late surge from the home team denied them maximum points.

Adamawa United and Warri Wolves were involved in a six-goal thriller at the Pantami Stadium, Gombe with the home team securing a draw after trailing in the game thrice.

Stanley Otu scored first for the Seasiders in the second minute but Anayo Ogbonna equalised in the ninth minute and he notched the leveler again in the 32nd minute after Wolves regained the lead in the 26th minute through Sunday Williams.

Efe Yarhere drew the Seasiders into the ascendancy for the third time in the game in the 49th minute but Adamawa United’s Idris Abubakar bagged the equalising goal in the 78th minute to make for a frenetic finish.

Rivers United’s 14 games winning run at home was halted by Abia Warriors who played out a goalless to gain a measure of revenge after their 1-0 loss to the same team in the Matchday Two of the season. The Pride of Rivers are fifth on the log with 39 points while Abia Warriors are in the 13th spot with 28 points from 21 games. They have a game against Enyimba still outstanding.

At the New Jos Stadium, Plateau United thrashed Wikki Tourists 4-1. Ibrahim Mustapha scored first for the Peace Boys in the third minute for his eighth goal of the campaign but Jubrin Abubakar equalised briefly for the Giant Elephants in the ninth minute. Mohammed Zulkifilu put Plateau United ahead with two goals in the 17th and 55th minutes for his eighth strike of the season as well. Oche Ochowechi extended the lead further with the fourth goal in the 92nd minute.

The Peace Boys move into the top 10 for the first time in recent weeks with 31 points from 22 games while Wikki plummet to the 15th spot with 24 points.

FC IfeanyiUbah returned to winning ways for the first time in 12 games after a laboured 1-0 win courtesy of Ekene Awazie’s early goal while Nasarawa United stopped Heartland FC 3-1 with Aliyu Abdullahi scoring a brace and Martins Owolijah’s strike. Chijioke Akuneto reduced the tally for the Naze Millionaires in the 85th minute.

Nasarawa United move to the fourth position with 39 points while Heartland remain in the seventh spot with 32 points.

MFM pipped Lobi Stars 1-0 to move farther away from the drop zone to the 11th spot with 30 points after a third straight victory.