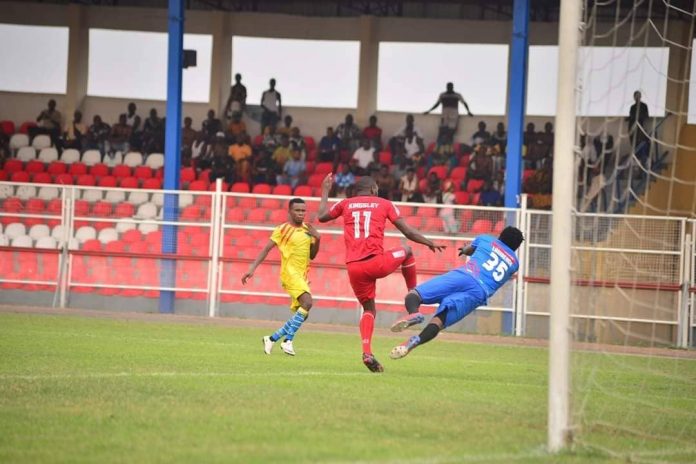 It was a dream start for new head coach, Ortega Deniran, as Warri Wolves shared the spoils with Adamawa United in a six-goal thriller on Matchday 22 of the Nigeria Professional Football League, NPFL, on Sunday.

Two minutes into the game, Stanley Otu poked home a Stephen Eregare cross to put the Seasiders in the lead.

Seven minutes later, Anayo Ogbonna leveled terms for the Yola side to the utter disappointment of the visitors.

The Wolves went back into the lead again, when Williams Sunday profited from a defensive error inside the box and scored.

But that lead did not last, as United came back to reckoning again with an Anayo Ogbonna equalizer.

Four minutes after the resumption of the second half, Efe Yarhere arrived the box at right time to finish off a fine move and send Warri Wolves into the lead for umpteenth time in the encounter.

Inside the final quarter of an hour, Idris Abubakar took a swing from outside the box and beat Warri Wolves’ goalkeeper John Lawrence, to tie the match at 3 – 3 at the end of the 90 minutes duration.

Speaking after the game, the chief executive officer of the club, Etu Moses, praised the team for putting in a decent shift during the game.

“The boys gave it their all. But there’s need for more work in the next game against Lobi.”

“The battle continues. It’s not over yet.”

He gave the team a cash reward of one hundred and fifty thousand naira.

Warri Wolves will next play Lobi Stars of Makurdi on Wednesday, May 26 on Matchday 23 at the Delta State Polytechnic Stadium in Ozoro.