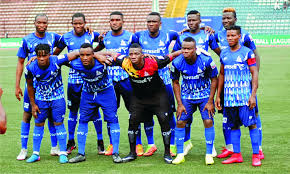 Rivers United began their CAF Confederation Cup preliminary round first leg tie on a losing note after they allowed Futuro Kings of Equatorial Guinea to runaway winners in a game decided yesterday in Munguno.

Futuro Kings scored first in the 46th minute when Nkema Gregoire rose highest to nod home the curtain-raiser and they doubled their advantage in the 68th minute to leave the Pride of Rivers with a mountain to climb had the game ended that way.

But Rivers United continued a wave of ceaseless attacking forays into Futuro Kings vital area and it paid off when the Nigerian representatives were awarded a penalty late in the game which Godwin Aguda converted in the 77th minute after the referee spotted an infringement in the Equato- Guinean vital area.

The goal ensured that the Pride of Rivers return to Port Harcourt with a priceless away goal as the tie ended Futuro Kings 2, Rivers United 1.

The second leg holds on December 6 at the Adokie Amiesimaka Stadium, Port Harcourt with Rivers United needing at least a 1-0 win to eliminate Futuro Kings.