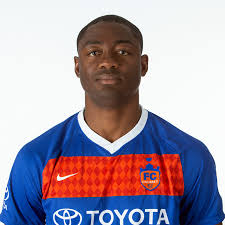 Columbus Crew SC striker, Fanendo Adi believes the bribery allegation on some Nigerian coaches and football officials have not been well managed and has given other nations another impression of Nigerian players in overseas who are eager to play for the Super Eagles.

Chinedu Obasi and Taiye Taiwo have come out to alleged that they were schemed out of Eagles reckoning because they were unable to offer bribes to protect their places but Adi who had been called up to Eagles camp but never played for the senior national team said he experienced nothing of the sort before he got an invite.

Adi who previously played for Trencin SC (Slovakia) , Copenhagen ( Denmark) and Portland Timbers in the United States’ Major League Soccer pointed out that it pained him to read that people from other countries now think that every player that wants to play for Nigeria offers a bribe to do so.

“Yeah! I have read some of those stories about players accusing coaches and officials of asking for bribes to be called up into the national team,” Adi disclosed on foremost WhatsApp platform, Nigerian Sports Mouthpiece.

“I think it is one of our failures in Africa generally and in Nigeria in particular. We have this problem and when players in the calibre of Chinedu Obasi and Taiye Taiwo accusing officials or say those things they said then it goes global.

“It is very common here when a player gets invited into the national team in Nigeria, the common thought is that you have paid your way in. It is understandable why people think like this because at times you see players in the national team maybe that are not ripe enough to be there at the moment but the coaches feel they are riped enough for the invitation. It becomes a public matter for people to judge the ability of the players invited to the national team.

The attacker, however, pointed out that issues like this should have been better managed and not allowed to become global trending topic because of its implications.

“Situations like this are rising and we just have to handle it with care because when you play out there and some of your International players are having a discussion with you on what they heard about African and Nigerian players paid their ways to play for the national team. It is a common phenomenon of what guys out here believe about Africa and Nigeria in particular.

“It worsens the situation and hopefully it could be curtailed but I feel if players have these grievances they can say whatever they want because there is freedom of speech and expression but I just feel there is a better way to handle it than making it go public and out there it becomes topic of the entire world.

“This could make them mock Africans and Nigerians because of the whole situation. Personally I can’t say I have experienced anyone that has asked me for money.

“We just have to be grown-ups in whatever we do. I won’t say I paid my way into the national team at anytime but those that have said something about it I think it is just their own way of handling the situation.”