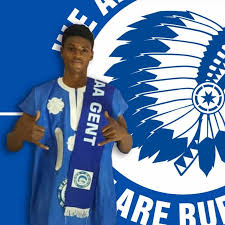 Barely three days after Oladoye Adewale bagged his debut for KAA Gent, another Water FC graduate and a star of the Flying Eagles class of 2019, Emeka Chinonso has played his first game for the same Belgian club.

The game was a key Jupiler League playoffs tie for the Europa Conference League ticket between Gent and KV Mechelen played on Saturday night at AFAS-Stadion Achter de Kazerne and Chinonso was introduced in the 79th minute in place of Roman Yaremchuk.

Gent won the game 2-1 with Roman Bezus and Tarik Tissoudali scoring the goals in the 57th and 67th minutes while the home team, Mechelen reduced the goal arrears in the 72nd minute from the penalty kick converted by Ferdy Druijf.

The victory cemented Gent’s place in the newly introduced Europa Conference League with 38 points at the end of the playoffs. They pipped KV Mechelen (35 points), Oostende (34 points), and Standard Liege (28 points) to the sole ticket to the competition.

The 19-year-old Chinonso gave a good account of himself throughout the final 16 minutes he lasted on the pitch and his overzealousness also made him go into the referee’s book with a yellow card in the 95th minute.

Chinonso and Adewale have thus assisted Gent to qualify for European clubs competition again after they took part in the Europa League in the outgoing season and they will hope to be integral members of the team next season having succeeded in getting their breakthrough the just-concluded season.

While Adewale took part in the Ladan Bosso led Flying Eagles class of 2021, Chinonso was a prominent member of the Nigeria U20 side to the FIFA U20 World Cup in Poland and played in all the team’s four games against Qatar, the USA, Ukraine, and Senegal before their exit in the Round of 16.