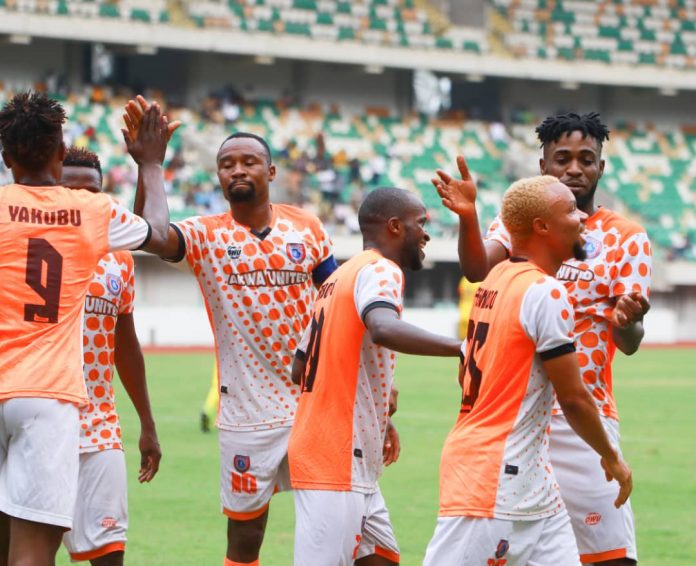 Akwa United, Nasarawa United, and Kano Pillars, Enyimba and Rivers United  maintained their top five positions at the apex of the 2020-21 Nigeria Professional Football League (NPFL) table after the end of Week 35 games played across 10 centres.
The top five teams all won their games starting with leaders, Akwa United who defeated Jigawa Golden Stars 3-0 with goals from Ubong Friday, Charles Atshimene, and Wisdom Fernando to keep their six points gap at the top with 67 points from 35 games ahead of second-placed Nasarawa United who thrashed Sunshine Stars 4-0 in Lafia.
Both Nasarawa United and Sunshine Stars will face off again on Friday in the semi-final of the Aiteo Cup but it was the Solid Miners that laid the early marker with a 4-0 thrashing of the Owena Whales in a tie played at the Lafia Township Stadium on Sunday. Silas Nwankwo scored twice to increase his goals haul in the league to 18 and 20 in all competitions.
Nasarawa United remained in the second position with 61 points and a mammoth goals difference ahead of third and fourth placed Kano Pillars and Enyimba who also beat Abia Warriors and MFM respectively and are on the same 61 points. Sai Masu Gida needed Rabiu Ali’s penalty kick conversion- his eighth of the season from his 14 league goals deny Abia Warriors a share of the spoils while Anthony Omaka’s last gasp strike handed crucial points to the People’s Elephant who pipped stubborn Olukoya Boys 2-1 in Aba.
Rivers United scored two first half goals to put FC IfeanyiUbah further on the brink of relegation. The Pride of Rivers are in the fifth spot with 59 points from 35 games while the Anambra Warriors are in the 19th position with 35 points. They will face champions-elect, Akwa United knowing that anything other than the three points could see them confirm their place in the lower league just as did Adamawa United last Wednesday after their loss to Dakkada.
Kwara United,  Enugu Rangers and Lobi Stars secured important away points against Heartland, Adamawa United and Plateau United in that order to occupy sixth, seventh and eighth spots with 56, 56, and 54 points while Dakkada remained in the ninth spot with 49 points despite losing 2-0 to Katsina United. Plateau United complete the top 10 with 48 points.