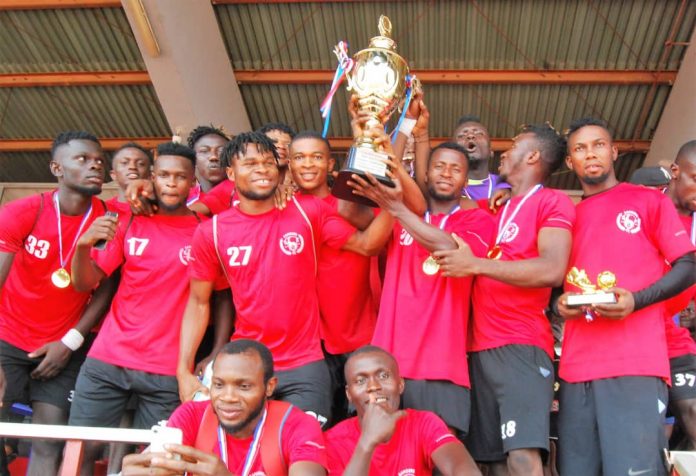 Rangers have emerged as the winner of the 2nd Ifeanyi Ekwueme Tico/Select Pre-season Tournament after they thrashed Rivers United 2-0 at the Nnamdi Azikiwe Stadium, Enugu on Wednesday.

The Flying Antelopes had topped Group A with two successive victories over PXEL and Apex Krane to pick the first final ticket while Pride of Rivers ensured the grand finale would involve the two NPFL teams in the tournament after the got two wins too against Ingas FC and Goddosky FC.

It was the host that settled quickly into their game with the trio of Agu Kenechukwu, Ugochukwu Ugwuoke and Chiamaka Madu pulling the strings for the coach Salisu Yusuf tutored side and could have registered the opening goal as early as the h minute when Tope Olusesi’ incisive cross over the face of the goal was missed by team mates with Afelokhai in no-mans-land.

It was the turn of new acquisition, Christian Nnaji, on 13 minutes to watch his well struck shot nestled in the safe hands of Theophilus Afelokhai in a half that saw the ‘Flying Antelopes’ showing dominance but yet to find the back of the net.

With the hot sun taking its toll on the players, a water break was sanctioned by the referee and few minutes after the game re-started, the Enugu landlords, carved open the backline of the ‘Pride of Rivers’ after some neat interchange of passes saw a pass from Ugwuoke Ugochukwu locate Dauda Madaki whose inch-perfect cross found an unmarked Chinonso Eziekwe inside the box to nod past a stranded Afelokhai for the game’ opening goal on the half hour mark.

Five minutes into the second stanza saw Eziekwe upended inside the box by Ifeanyi Anaemena after the enterprising attacker outran the defender and was poised to release a pass.

Dauda Madaki won the battle of nerves against Afelokhai as he expertly converted from twelve yards on 52 minutes to extend his side’ lead.

Efforts by both teams to score more goals failed to yield any dividend as near-misses, splendid goalkeeping and stout defending combined to rob the encounter of more goals.

In the classification match, Apex Krane of Agbor, Delta state defeated Godosky F.C of Nnewi, Anambra state 5-4 on penalties after both sides settled for a goalless draw at full time.

Rivers United stepped up their game after they were behind but poor marksmanship and good defending from Rangers denied them the needed equaliser.

Rangers sealed the win with a second goal in the early period of the second half.

The Flying Antelopes have thus succeeded last year champions, Lobi Stars who then pipped Ingas FC 1-0 in the final.

Rangers were presented with the trophy and winning medals among other individual awards given to the players that distinguished themselves in the tournament.

Earlier, Apex Krane beat Goddosky FC 5-4 on penalties to win the third-place game at the Nnamdi Azikiwe Stadium, Enugu. The game had ended goalless before spot-kicks were used to separate both teams.