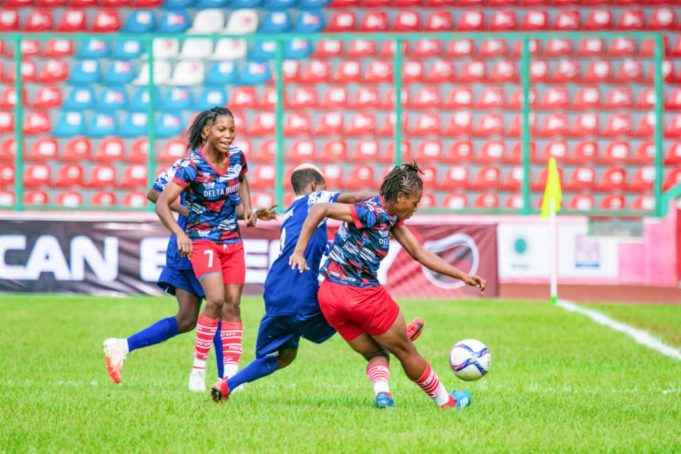 The Solid Babes had on Tuesday beaten hosts, Edo Queens by the same scores at the same UNIBEN Sports Complex in their first game to make it second consecutive victory with two clean sheets also.

Recall that their supposed first match with Naija Ratels was not played due to Ratels’ no-show protest over sponsors kits issues with the organisers of the tournament. The match has however been rescheduled for Saturday.

Coach Christopher Danjuma led Amazons got their breakthrough in the 27 minutes of the game when Chimeberem Opara took advantage of a loose ball from Delta Queens Goalkeeper Ihuoma Onyebuchi and slotted it in to give the Solid Babes the three points.

The Deltans had the opportunity to equalize when a penalty kick was awarded to them in the 76 minutes of the game but Sarah Nnodim’s poor kick from the spot was well saved by Nasarawa’s goalie Rita Akarekor.

Delta Queens continued to mount pressure on the Nasarawa Amazons’ defense and their efforts paid off again with another penalty kick advantage which Mercy Omokwo missed in the 81st minute to deny themselves a point. The Deltans hope of winning the 2021/22 NWFL crown seemed to have been dashed as they have only managed to pull two goalless draws, against Edo Queens and Rivers Angels so far in the tournament.

Nasarawa Amazons have six points from two games and they will face Rivers Angels today in a fight to finish for the league title. The Pride of Rivers must win the game to stand any chance of retaining the title they won last season while the Amazons will be content with a draw ahead of the final day duel with Bayelsa Queens on Sunday. Delta Queens will lock horns with Bayelsa Queens in a South South derby, also today.

Chiamaka Okwuchukwu gave Rivers Angels a deserved lead 57 minutes into the game after a barren first half.

She got a brace in the 81st minute after pouncing on a coiled pass from Tosin Ogundeko and brilliantly slotted the ball into the net to seal victory for Rivers Angels.

Rivers Angels have four points from three games one win, one draw and a loss ahead of today’s clash with Nasarawa Amazons while Naija Ratels are still pointless after two games. They continue their learning curve with a game against hosts, Edo Queens today at the Samuel Ogbemudia Stadium.

Bayelsa Queens continued with their impressive start to the ongoing NWFL Super 6 in Benin City after they pipped hosts Edo Queens 2-1 to make it three wins out of three games.

The Prosperity Ladies had beaten reigning champions, Rivers Angels on Monday before following that up with a 4-0 whiplash of Naija Ratels on Tuesday.

Just like it was on Tuesday when Monday Gift scores a hat-trick, the on loan striker from FC Robo Queens that narrowly missed the season ending playoffs, netted twice in the 47th and 57th minutes to extend her excellent goal record to six goals from three games.

The Super Falcons attacker scored the first goal of the evening two minutes into the second half when she got to the end of a good pass from Etim Edidiong and she doubled Bayelsa Queens’ lead 10 minutes later after she dribbled past Shukurat Oladipo inside the Edo Queens half and expertly shot beyond the reach of Edo Queens goalie.

The home staring second successive defeat reduced the tally through Esther Onyenezide’s wonder strike in the 72nd minute but they were unable to muster a comeback as Bayelsa Queens’ cruise control continued without let up in Benin.

Bayelsa Queens are in first spot after three games with maximum nine points but they have played a game more than second placed Nasarawa Amazons who have six points from two games.

Today, Bayelsa Queens will trade tackles with Delta Queens who are yet to register a win or score a goal after three games, at the Samuel Ogbemudia Stadium, Benin while second placed Nasarawa Amazons will face their stiffest challenge of the ongoing Super 6 when they square up with reigning champions, Rivers Angels at the UNIBEN Sports Complex, Ugbowo, Benin.

Nigeria, Mexico to clash in Los Angeles on July 3