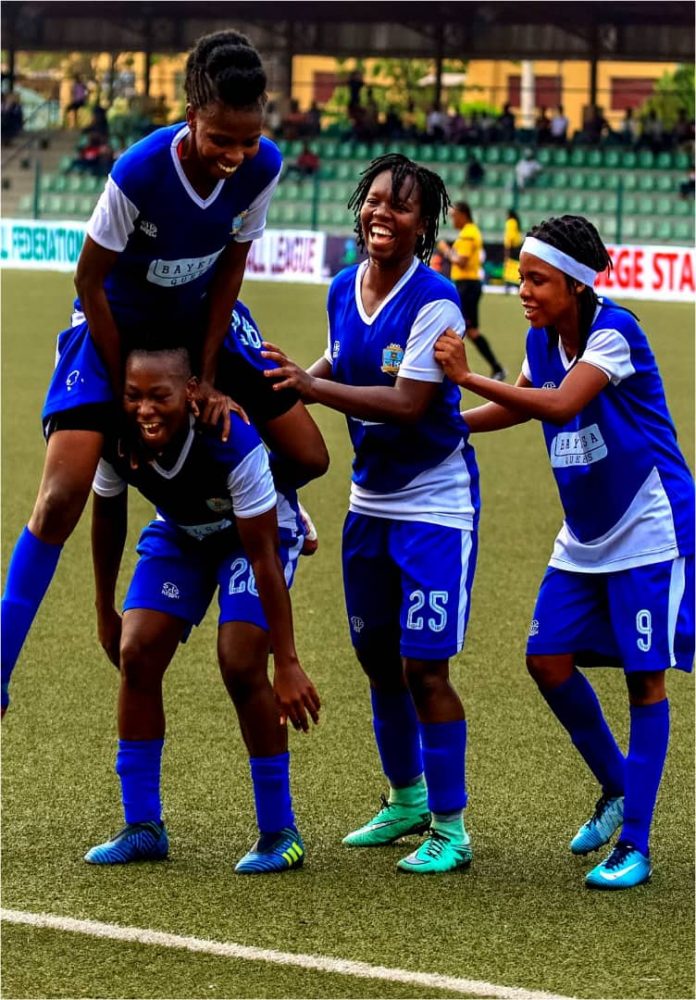 NWFL Matchday 8 games were played on Wednesday across six centres with the remaining fixture in Akure between Sunshine Queens and Pelican Stars expected to be played today, Thursday. Www.dasportstainment247.com highlights the six games played yesterday while providing some key statistics too

FC Robo Queens bounced back to winning ways after the defeat in the hands of Delta Queens last week with a 5-0 trouncing of neighbours DreamsStar Ladies at the Legacy Pitch, National Stadium, Lagos on Wednesday.

The game ended as a contest as early as the 21st minute when Esther Oyenezide and Monday Gift (her fifth goal of the season) put FC Robo 2-0 up but DreamStar Ladies gave a brave fight thereafter until more flurry of goals in the final six minutes of the game through Shade Ijamilusi, Rukayat Shobowale and Rahimot Adebayo in the 84th, 86th and 87th minutes in that order. FC Robo are now fourth with 15 points from eight games.

Rivers Angels continued to keep the heat on Bayelsa Queens in the race for the NWFL title as they hammered Royal Queens 3-0 in Port Harcourt. Royal Queens tried to repel the Jewels of Rivers in the first half but they were at the backfoot at the start of the second half through Damilola Koku but the second and the third goals from Regina Otu and Ibinabo Georgewill killed off any attempt of a comeback in the 82nd and 93rd minute. Rivers Angels remain unbeaten but they are in the second spot behind Bayelsa Queens with 20 points from eight games while Royal Queens are in the 10th position with 10 points.

Nasarawa Amazons are truly back and have won their last three games after a lacklustre start to the season. They added Osun Babes to their victims on Wednesday at the Lafia Township Stadium. Amarachi Okoronkwo who seemed to be getting better with advancing age despite several years of professional football hit the first goal for the Amazons in the 18th minute before Lola Philips‘ 52nd header made the game safe. Nasarawa Amazons are now seventh with 12 points but Osun Babes slid to the sixth spot also with 12 points.

Bayelsa Queens continued to absorb the pressure threw at them by Rivers Angels and despite playing on a neutral turf of the Dan Anyiam Stadium, Owerri, the Restoration Ladies slammed hapless Ibom Angels 4-0.

Mary Anjor grabbed a brace to put herself among the leading scorers with four goals in the 10th and 48th minutes. Joy Bokiri with the second goal in the 38th minute sandwiching Anjor’s goals while Charity Reuben continued her impressive stats with her fifth goal of the season. She has scored in Bayelsa Queens’ last three games. The Restoration Ladies continue to hold on to their one-point advantage at the top with 21 points from eight games. Ibom Angels on their part are in the 13th spot with a paltry four points. They have the second poorest defence in the league having conceded 13 goals from eight games. Only Royal Queens (13 goals), and DreamStars Ladies (18 goals) have shipped in more.

Joy Omewa lived up to her preseason hype with the goal that delivered the three points to Confluence Queens at home to Abia Angels in Lokoja. The Yahaya Bello Ladies have been enmeshed in off-the-pitch crises that slowed down their performances but they seemed to be getting over it after their first win in three games.

After going through a purple patch in recent games, Dominance Odubanjo dominated the headline at the Agbor Township Stadium with the only goal of the game in their 1-0 victory over Edo Queens. Odubanjo struck seven minutes into the second half, her fourth goal of the season and the hard fighting Obaseki Ladies couldn’t muster a comeback.

Delta Queens are gradually creeping to the top. They are now third on the log with 16 points from eight games but Edo Queens has not maintained their impressive start and have plummeted to the fifth spot with 14 points. The management of the club has asked experienced gaffer, Rowlandson Odeh to step aside for what they termed administrative and technical reasons but www.dasportstainment247.com feels it may be connected to Edo Queens recent struggles.

Sunshine Queens and Pelican Stars’ game couldn’t hold yesterday at the Ondo Sports Complex, Akure due to some technical hitches but it has been slated for today, Thursday at the same venue.

The Owena Ladies will go in the hunt for the three points that will take them to the sixth spot at most while a surprise victory for Pelican Stars could see them in the 11th spot. Sunshine Queens and Pelican Stars have 10 and five points respectively after seven matches each.