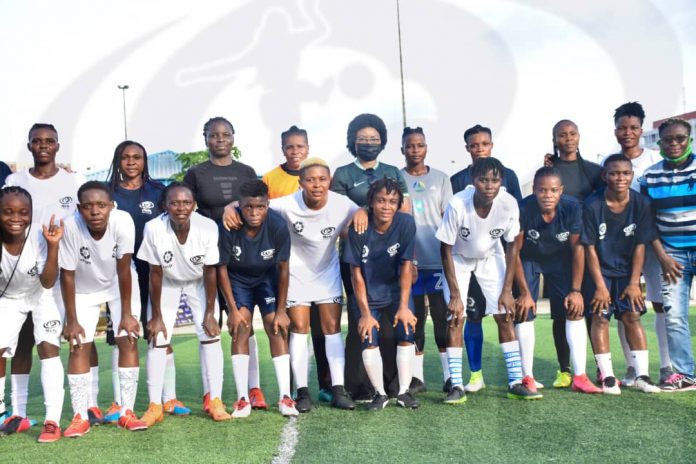 The Nigeria Women Football League at the weekend made history with the ‘La Liga Show Your Other Side Challenge,’ a talent show event for talented players in the women’s league in Nigeria.

It was the first of its kind for women’s football in the country, put together by the Aisha Falode-led NWFL.

Sixteen top league players were invited for the one-day challenge, they include; Rivers Angels goalkeeper Ibubeleye White, Vivian Ikechukwu, Joy Jerry, Nkechi Agams, Monday Gift, Tejiri Edwards, Glory Ogbonna among others. The players who were introduced to the crowd one after the other as football celebrities by the two masters of ceremonies: Chisom Mbonu- Ezeoke of SuperSport and Ogechukwukanma Ogwo of Sports Radio Brila FM, were dressed in their various clubs jerseys. As they run into the pitch individually they thrilled the crowd with latest dance steps.

The players were opened to various talent displays with the ball. From the joggling of the ball with all parts of the body to penalty kicks challenge, target of the woodwork from 25 yards to free kicks. It was organised in form of competitions between Team White and Team Black, of eight players each. The event was rounded off with a Seven-A-Side football match of 20minutes each half. This witnessed a display of football artistry to the admiration of the invited spectators which included young girls from across Lagos State, the president of the Nigeria Football Federation, Amaju Pinnick, the Spanish High Commissioner to Nigeria His Excellency Juan Otero, La Liga Representative in Nigeria, Desmond Chiji, La Liga Ambassador to Nigeria Mutiu Adepoju, Technical Committee Chairman Lagos FA, Dotun Coker, Chairman MFM Sports, Godwin Enarkhena and football scout, Onome Obruthe, who came with the MFM female basketball team to cheer their football colleagues, at the Elegbeta Sport Ground, Apongbon, Lagos.

The NFF president and FIFA Council member, Amaju Pinnick, joined the sixteen super Stars in the penalty challenge where he took five kicks and donated N50,000 each per kick which amounted to N250,000 given to the players.

Pinnick commended the Chairperson of the Nigeria Women Football League, Aisha Falode, and her team in the NWFL for their consistency and renewed vigour to further develop Women’s football in Nigeria.

He noted that, Falode’s Midas touch in the organisation of developmental programmes for women football clubs, is quite commendable and we in the NFF appreciate her commitment and dedication to take the game to greater heights in Nigeria and indeed the African continent.

Pinnick reiterated that just some weeks ago; “NFF board members and other Nigerian top football administrators were at the Dipo Dina International Stadium Ijebu-Ode to support Aisha Falode in the NWFL Super Six which came out to be a revolution in the development of the gender game in Africa. It was a great success because of the hard work put in by the NWFL led by Falode. We are happy in the NFF because she has continually made our job easy in the area of women football develoment.

“The result of these is imminent sponsorship for the NWFL League, and we are optimistic this will come very soon.”

The chairperson of the NWFL, Aisha Falode, in her comment at the event venue, was full of appreciation for the La Liga Women’s Department for their consistent drive to develop women’s football in Nigeria and by extension in Africa.

She noted that; “In 2018, in an agreement signed in Spain by me and the La Liga Women’s Department, La Liga entered a partnership with the NWFL that enables Nigerian women league champions embark on a tour of Spain where quality games will be arranged for them to further raise the standard of the game.

“The same agreement included the institution of a technical partnership with the NWFL to train all coaches in the NWFL Premiership clubs in Advanced Coaching Courses and Seminar aimed at boosting their technical knowledge. All these culminated to the world-class standard of play exhibited by all the teams that qualified for the Super Six in Ijebu Ode.

“The deliberate efforts by La Liga to take Nigerian women’s football league to the pinnacle of the gender game in the world, is well appreciated,” Falode said.