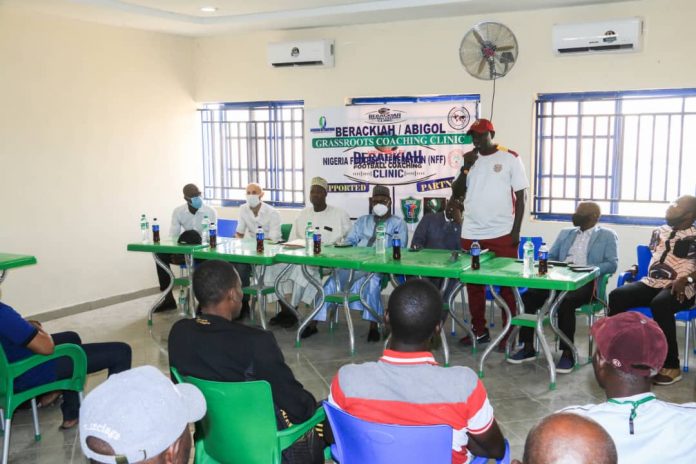 The Honourable Commissioner of Youth and Sports Development Bauchi State Alhaji Adamu Manu Soro has commended the organizers of Berackiah/Abigol Football Coaching Clinic for finding the State worthy of hosting as the North East Zone.

Alhaji Adamu made this disclosure at the opening ceremony of the 5-days clinic at the Games Village Centre in Bauchi State.

Soro noted that the programme will serve as a big opportunity for the atate in its efforts in building the capacity of the youth and also develop the game of football.

“I want to give assurance of my Governor that he is committed to see our youth are doing something right and we appreciate you for bringing this programme to our State.”

In his remarks Mallam Murtala Sambo, the Coordinator of Nationwide League One (NLO) in the North East
appreciated the Government of Bauchi State for motivating in their efforts in developing the game of football from the grassroots.”

While commending the Bauchi State FA Chairman, MON Patrick Pascal for his efforts, the coordinator stressed the need for club to have able hands in the helms of affairs as one of the inspiration of the partnership between the clinic organizers and the NLO.

While noting that the project has the potential to deliver the ‘shared dream’, he revealed that NLO has been receiving testimonies from participants in other locations where the programme has held.

“I implore whoever is participating in this clinic to show total commitment because without that you can’t get what you want.

With the train of the programme now in Bauchi State for the North East State, Berackiah/Abigol Football Coaching Clinic has now covered all the 6 geopolitical zones of the country.

Other guests at the opening ceremony are Coach Mathew Olorunleke, a Nigerian-Italian who is one of the resource persons, Gian Marco, an Italian certified goalkeeper trainer, Owolabi Aleshinloye Head of Media Berackiah/Abigol Football Coaching Clinic and a host of others.